More than a Pizza Joint

Pizza is one of those feel-good foods and I cannot imagine life without it. It’s considered to be one of America’s most favorite comfort foods and so popular that there is a National Pizza Day observed on February 9 and a National Pizza Month celebrated in October, but I think it’s good anytime and I am always in search of the best pizza. My Italian friends and I have complained for years that it’s hard to get a good pizza in Vegas, well at least one that tastes like it’s from New York but after eating at Pizza Rock in downtown Las Vegas, we can finally stop complaining. 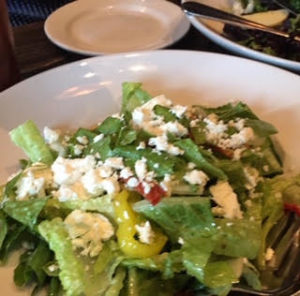 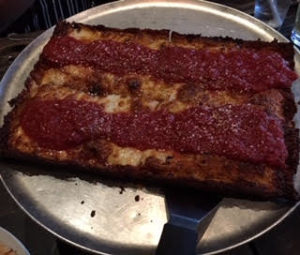 Not only do they offer a large variety of traditional, gourmet, and classic made-to-order artisan pizza pies, but you can also get it by the slice. While Pizza Rock is known for their award-winning pizzas, they also have a large selection of appetizers, salads, calzones, burgers, Stromboli, pasta dishes and desserts, plus a full bar with all your favorite libations. We started with the meatballs, beer battered artichokes, and Italian Fries with Rosemary and Garlic. The second course, Gorgonzola and Apple Salad with spicy candied walnuts, dried cherries, and a flavorful Balsamic Vinaigrette dressing and the Italian Chopped Salad with Salami, Sopressatta, banana peppers, Kalamata olives, Peppadew peppers, artichoke hearts, and Feta. 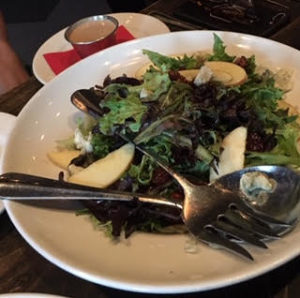 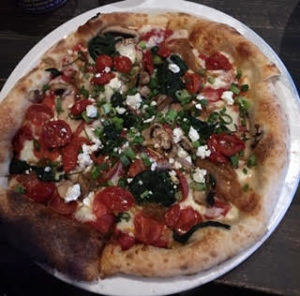 Oftentimes it’s hard to decide what type of pizza and toppings to get especially when there are so many options, but after much debate we finally agreed upon a Pepperoni and Mushroom, a Gluten-Free Veggie, and for the friend who claims she is a “natural” redhead and coincidentally from Michigan, the “Detroit Red Top”. This square-style pizza had butter-toasted corners, white Cheddar, Mozzarella and Wisconsin Brick Cheese topped with homemade Marinara, Pecorino/Romano Cheese, Oregano and Garlic. The Detroit Red Top is a seriously delicious pizza.

So, you would think after all that food, no one would consider ordering dessert. To end a savory meal with something sweet is a perfect way to create a balance, so I ignored the group’s disbelief and snide remarks and selected the Zeppoles. And because I know my friends so well, I asked for two orders. You could smell the sweet aroma of freshly fried dough before the plates hit the table. There were four big and fat Zeppoles on each plate–light, fluffy, and piping hot with sides of fresh whipped cream and warm caramel and chocolate dipping sauces. I swear all eight were consumed within five minutes. No need to wait for a carnival to hit town, the Zeppoles are featured on Pizza Rock’s dessert menu daily. 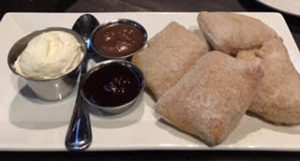 Pizza Rock is a high-energy fun place with a classic rock vibe located in downtown Las Vegas nestled on the corner of 3rd Street and Ogden across from the Grand Hotel. Inside are a large modern dining room and a beautiful patio for those who like dining al fresco. The Pizza Rock concept was brought to Las Vegas by Tony Gemignani, a 12-time World Pizza Champion and president of the World Pizza Champions, a master instructor at the International School of Pizza, and a Guinness World Record Holder. He is a two-time Food Network gold medalist, a restaurateur of 21 concepts, and owner and executive chef of several restaurants. Gemignani is famous for the phrase “F&F”’ used to describe his restaurants; Full Service and Fast Casual.

Pizza Rock is more than a pizza joint and a must-try. It’s open for lunch, dinner, happy hour, and an acoustic Sunday Brunch but if you don’t make reservations, chances are you will have a long wait no matter when you go.

Single Parent Veterans: How You and Your Kids Can Thrive in 2022

How to Lead a Hybrid Workplace Effectively

Shelley Stepanek -
Virgin Hotels has numerous restaurants and we couldn't have been happier with this event! Stop by next time in town—located on Paradise and not the strip.
Thrive, Inspire, Live — No Strings Attached E-News - NSAEN is a lifestyle online magazine featuring eclectic entertainment, health and wellness tips, and your playbook to Vegas.
Contact us: info@nsaen.com
© Copyright 2019 | Designed and Developed for NSAEN, LLC