Some say a star is born every time an actor exceeds the expectations of a performance. When audiences feast their eyes on Anastasia Brosda in her breakout role as Skyla in the 2018 motion picture, Escalate, costarring Joshua Ferreira, they’ll be able to decide if they’re witnessing a rising star following in the footsteps of Jodie Foster, Anna Paquin and Jennifer Lawrence or perhaps the very first Oscar-worthy actress of her kind. 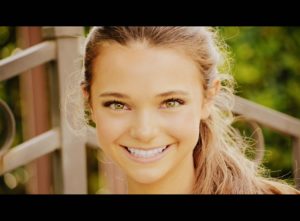 Cast as a kind and considerate girl who gains the trust of an angry and depressed boy, Brosda said she is excited about her role and her future in films.
“The most exhilarating character that I have brought to life is, ‘Skyla,’” Brosda said. “Skyla is a compassionate girl who has a strong connection with God. She meets a struggling, angry teenage boy who learns to trust her. The movie has a very powerful message and I enjoyed being on set with such a talented cast and crew.
I’m also excited about my supporting role as ‘Jamie’ in the film “Summer of My Discontent,” which will also be released in 2018. It’s a feature film produced by Rinky Dink Productions, Ltd., and directed by award-winning writer David A. Haines.”
When asked what type of actress she would like to be known as, Brosda responded, “I think of myself as an actress who is very adaptable. I have a natural comedic side, but I can play dramatic and even melodramatic very well. I also enjoy supernatural fiction and horror fiction. A good actress doesn’t accept labels and is versatile. I can bring any character to life and I can show many different sides of a character. Often, when you slip into a character the character does not have one explicit emotion. I love being able to prompt different reactions through one character.”
As a recipient of the President’s Award for Educational Excellence honoring her outstanding academic achievements, the 14-year-old actress is serious about her education and acting career.
She said, “Every day is a new gift that I look forward to. I look forward to learning from those around me, to improve my skills and therefore my craft. Be it other talented artists, mentors, coaches or my parents. I am rising by learning every single day from those with more experience. My parents support my ambitions and assist with their knowledge and advice. It is so incredibly significant to have people in your life that believe in you. For me, those individuals are my parents.” 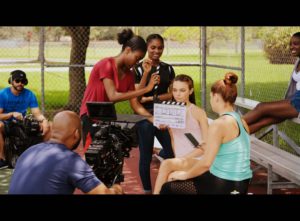 When discussing her favorite performances, Brosda explained, “I really like undergoing the dramatic side! Though comedy does arise naturally, so does drama. The difference between the two is the meaning behind the storyline. I feel that dramas have more of a sensation that one can relate to — a powerful message. Comedy is a performance, which I absolutely love doing! Also, when an actor has a message to convey to the audience it feels as if your character has a purpose, which many can relate to.”
Born in Sarasota, Fla., she is the daughter of Alexander and Katerina Brosda. Her younger sibling, Sebastian, is a sports model. They grew up in Miami Beach, where she started to take ballet classes at age six, at the Miami City Ballet School Children’s Division. She is a member of the International Thespian Society and has been involved in the performing arts most of her young life, appearing Off-Broadway in Miami’s “Willy Wonka & the Chocolate Factory Musical” as Willy Wonka, and as Grace Farrell in the stage production of “Annie.” 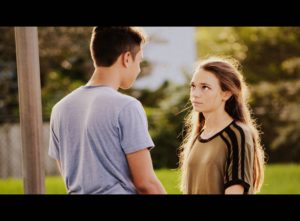 In 2018, Brosda will premiere on the silver screen with all eyes watching to see if this rising young star will gradually take her place among the acting elite and the stars of tomorrow.
EDITOR’S NOTE: To follow Anastasia Brosda on Facebook, visit: https:// www.facebook.com/AnastasiaBrosda. You can also follow her on Instagram at: https://www.instagram.com/anastasia_mirabelle/
or watch her demo reel at: https://youtu.be/o0_5DjHr3A4 or visit: http://www.imdb.com/name/nm9129160/bio?ref_=nm_ov_bio_sm

Photo 3
Contributed photo
ACTORS Joshua Ferreira and Anastasia Brosda will co-star in the 2018 faith-based feature film, “Escalate.” Brosda, who has over 30,000 followers on Facebook and nearly 35,000 likes on Twitter, said she is excited about her acting career and her future in films.

4 Things to Remove from Your Life