Award season is always exciting in Hollywood.  The Oscars, Golden Globes, Screen Actors Guild Awards are big news around the world.  But for the African American Community, the NAACP Image Awards are the ultimate tribute to those who have, against all odds, achieved success in dismantling the color line within the entertainment industry.  It is, for the African American community, the premiere event celebrating achievements and performances of people of color in the arts as well as those who promote social justice through their creative endeavors.

Although the film industry has a long way to go in equalizing the playing field for people of color, 2017 showed a pivotal progress.  Television shows portraying Black Americans in diverse roles were among the top ten successful television programs. 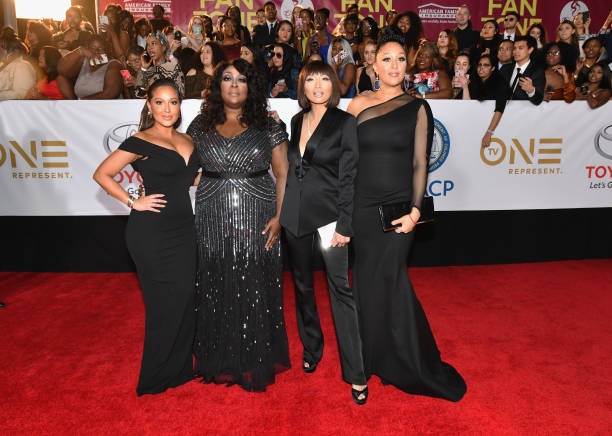 This year’s Image Awards profiled an impressive number of power brokers within the industry who are responsible for not only quality entertainment, but are showing impressive financial gain.

There is always something profoundly alluring when celebrities come out and walk the red carpet. Nothing is quite as dazzling as the fashions worn by the presenters and attendees.  They know their gowns and jewelry will be photographed, talked about and seen on the pages of fashion magazines for several weeks.

Actress Jurnee Smollet-Bell dazzled in a lacy, pink-tinged, high-collared Edwardian style gown. Her brother Jessie Smollet looked quite dapper on the red carpet as well wearing a navy blue, double-breasted waistcoat as he waved to the fans in the bleacher seats. Danny Glover, one of the most well-respected actors and civil rights activist, known for his dramatic and action hero roles walked away with the coveted Lifetime Achievement Award, and Ava DuVernay was honored with the Entertainer of the Year Award.

Among the presenters were recording artist Mary J. Blige who has been seen in a number of films.  Terry Crews, Angela Rye, Loretta Divine, Judge Greg Mathis, Halle Barry, Kerry Washington and Tracee Ross. Performances by Common and Andra Day left the audience mesmerized.  Charlie Wilson was honored with Music Makes a Difference Award.  Not surprisingly, “Black-ish” walked away with a number of awards. Anthony Armstrong won for outstanding actor in a comedy series.

The gifting suite is always one of the highlights of the Image Award show, where only select companies are invited to participate.   Image Award nominees paraded through the glittering suite where brand creators and marketers showered them with goods hoping for one of the great opportunities in the marketing world, a ‘brand identifier’, which is when a celebrity is charmed enough to use a product themselves in their daily life.  The most popular gifting showcase was that of Nehita Jewelry by designer Monalisa Okojie.  Monalisa, known as the Jewelry Designer to the Stars has been designing for over ten years.  Her jewelry has been worn by celebrities including actresses Halle Berry, Chrissy Teigen, Megan Goode, the late Whitney Houston and international award winning musician/songwriter, Vince Gelonese.

The Image Awards is more than just a haven of winners and hopefuls.  It is an occasion when people of color come together to recognize and celebrate each other and pay homage to those who have blazed the trail for them.  This year’s Awards did not disappoint.