(Hollywood, CA) When Comedian Ramzy Sweis released his first novel appropriately titled “Why We Never Repeat Jokes” on Amazon, it immediately got 5 out of 5 stars on every review.  His book is a fan favorite and has been called inspiring and thought provoking, two things every comedian dreams to have in their first novel…  Ramzy is getting ready for his book signing tour this fall (dates and locations- to be announced).  The sequel to “Why We Never Repeat Jokes?”, “History of Humerus & the 4 Humours” is available on Amazon.  “Funny Bones” will complete the trilogy, and lastly is the memoir, “7th University”…

In 2009 NeverRepeataJoke (NRJ) began as a screenplay; a year later a webseries, in 2011 Ramzy Sweis began to teach this method online.  In 2012 Ramzy sold NRAJ apparel. The website went live in 2013 and a year later the app followed suit.  Ramzy graduated from broadcasting school in 2015 with the NRJ radio show and has since published a memoir.

As the father /founder /proprietor of Anti Humor he wrote NRJ to blaze a trail, granting a future for joke tellers by way of meritocracy.  You don’t know you are enslaved by social media, forced to amuse others – screen to screen – whereas NRJ is visceral, taking the cat out of the bag.  As an (NYFA) New York Film Academy, (IMS) IL Media School, Columbia College graduate and 2nd City improv master Ramzy attained the impossible never repeating a single joke for as many episodes as he was born (83).  According to Ramzy, people either support the cause or continue on with the sitdown comedy social media users are enslaved with.

We have won the war & the battles.  Huge victory for print media talk radio written plus spoken word – Ramzy Sweis 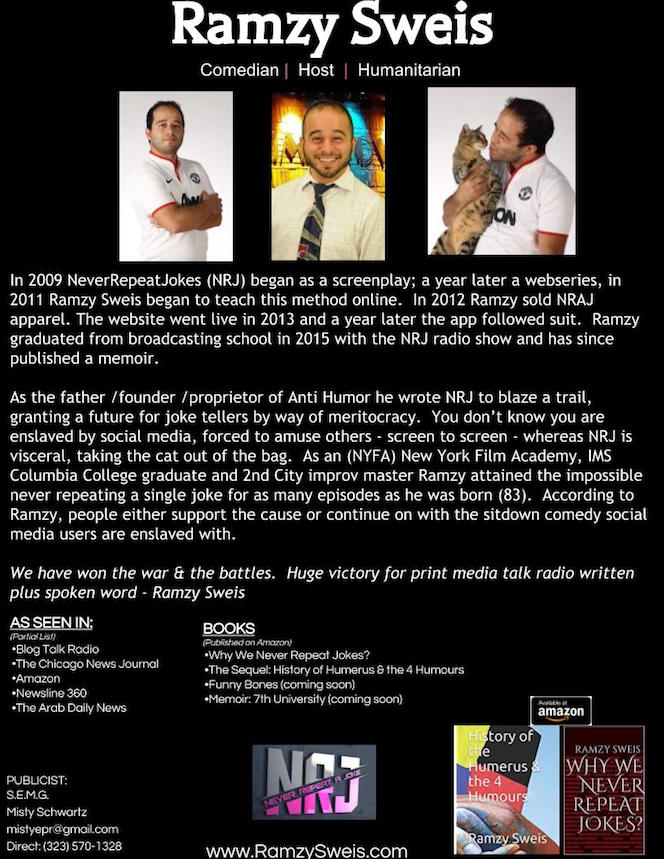 Stella Singleton-Jones Establishing her place in the Art World

Crystal Wilson -
0
CBD and Yoga work on the parasympathetic nervous system, and these interactions can trigger intense relaxation with a deep connection to your inner self.
Thrive, Inspire, Live — No Strings Attached E-News - NSAEN is a lifestyle online magazine featuring eclectic entertainment, health and wellness tips, and your playbook to Vegas.
Contact us: info@nsaen.com
© Copyright 2019 | Designed and Developed for NSAEN, LLC