Movie Review – Everything Everywhere All At Once

A24 and the writing/directing team Dan Kwan and Daniel Scheinert who gave us the wonderfully bizarre Swiss Army Man deliver one of the most unique pieces of cinema with Everything Everywhere All At Once, a movie that dares to make you feel if you don’t see hot dog fingers in Dr. Strange into the Multiverse of Madness you will be sorely disappointed. This A24 film touches upon the multiverse: multiple universes that have different versions of ourselves, how we conduct our lives and how it affects our future and those affected by our actions. This is not just a sci-fi action fantasy, it is a profound and funny cinematic experience. 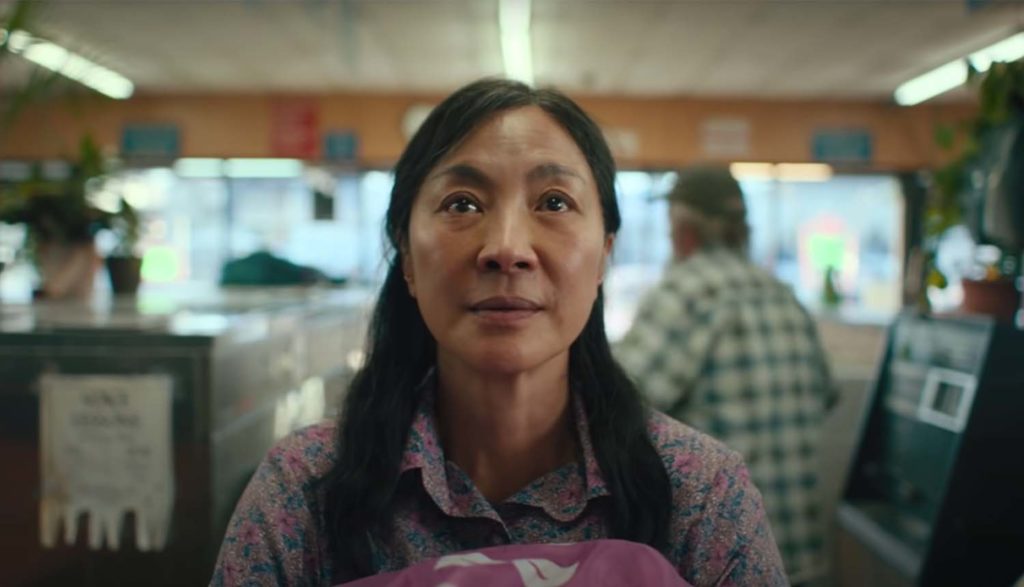 Michelle Yeoh, most recently known for Shang Chi and the Legend of the Ten Rings and Crazy Rich Asians, plays the middle-aged Chinese-American, Evelyn Wang, a laundromat owner, harried wife, mother and daughter that is about to face a dreaded IRS inspector over discrepancies in taxes regarding her business. She’s also dealing with a whiny husband, a father stuck in the old ways, and trying to hide her daughter’s sexuality from her father. This poor woman has so much to juggle, to suddenly throw in a visitor from a multiverse via her husband’s body is too much for her to bear. Did I mention she also has a party to prepare for and her daughter has surprised her by bringing her girlfriend along?

Yes, sounds like a whole hell of a lot going on from the start, and you’re right. You can’t help but wonder if we’re going to have a chance to catch our breath. But, the power and brilliance of Michelle Yeah’s performance keeps us captivated as she tries to keep her wits about her while dealing with her personal problems and is suddenly told that she is the answer to solving the problem of the multiverse. Does it sound silly? Absolutely. Pure fun and silliness abound. It’s the wackiness of the Monty Python crossed with Kung Fu Hustle and The Matrix. 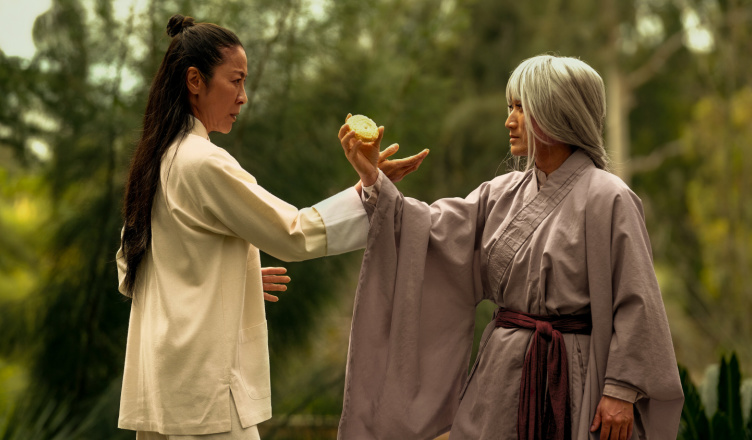 Evelyn scrambles to prepare herself for her dreaded IRS meeting. After some brief chaos they finally meet with the inspector, a senior citizen, Deirdre Beaubeirdra, played by an absolutely hysterically funny and frumpy Jamie Lee Curtis. The woman is ruthless and has no patience for Evelyn and her meek husband, Waymond.

The meeting is downhill from the start when suddenly Waymond appears to change in demeanor. He’s not the man Evelyn has known for years. He tries to tell her that she is the one he has been searching for and rapidly tells her what to do because he is another form of Waymond from an “Alphaverse.” This is all explained as everyone else appears to be briefly frozen in time. He quickly relays his situation before they are thrown back into the timeline. 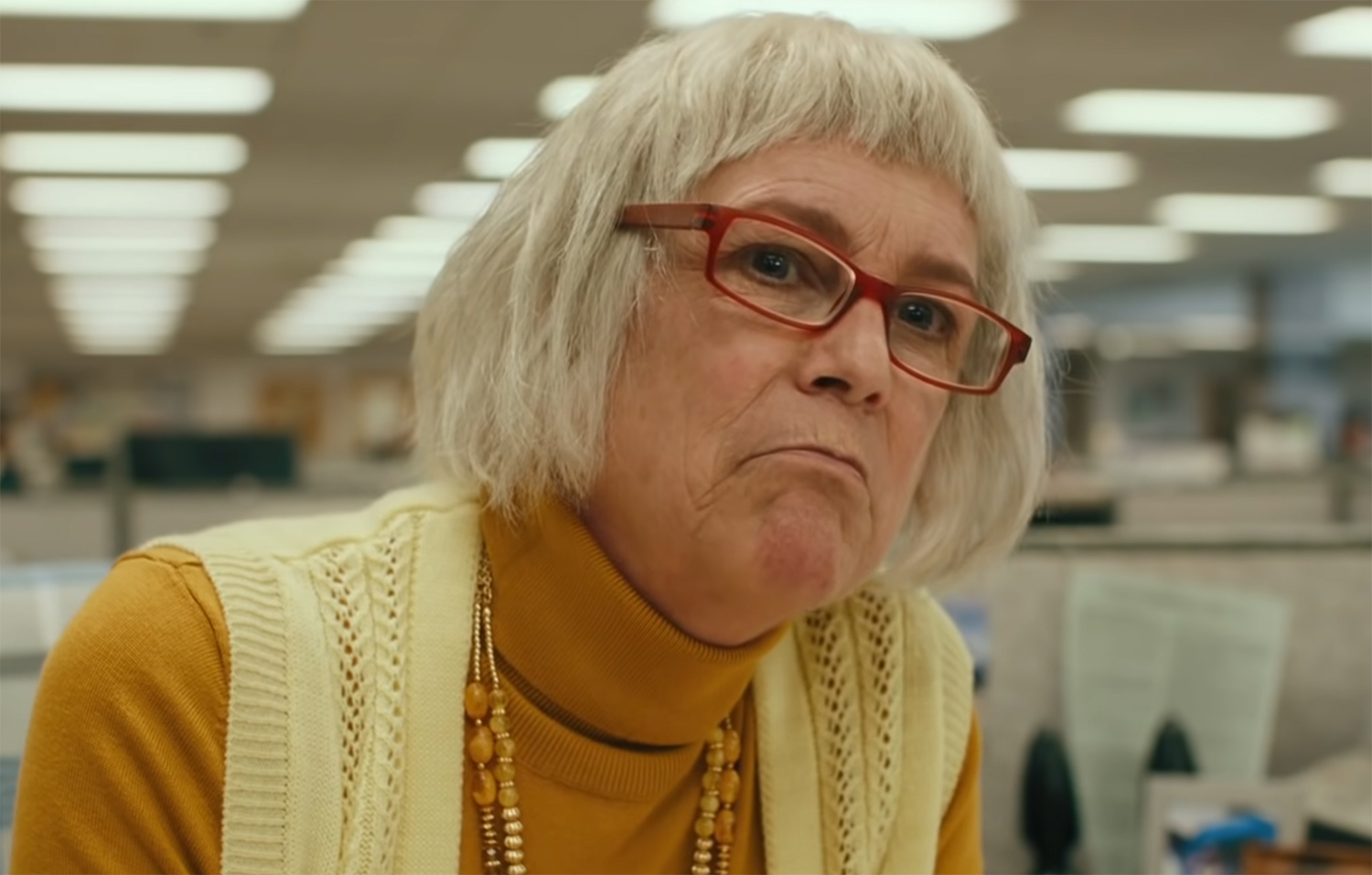 This sounds as ridiculous to us as it does to Evelyn which makes the situation all the more enjoyable. Alphaverse Waymond tells Evelyn about the multitude of universes merely created by choices that are made. He relates that her counterpart created “verse-jumping” technology that allowed people the skills, memories, and body of their parallel universe counterparts by fulfilling certain conditions. Confusing? Yes, at times, but it all seems to come magnificently together in the end.

Everything Everywhere All At Once is a perfect example of cinema of the absurd. It is also touching, brilliantly acted and goes as far as to answer some of the most difficult questions about life in general while making us laugh at the same time. This is a far bigger production than the writing/directing team’s last film and it shows. Yet all the martial arts, special effects, and outrageous costumes do not overwhelm the story and the heart of this film.

Shelley Stepanek -
Wanting to travel to Africa and see animals in their natural habitat, or go on a rocket ship and walk on the moon? Can’t afford the time or money? A new exhibit in Las Vegas, Illuminarium at the famous Area 15 will allow you to do that in less than a couple of hours, and for 1/100 of the money.
Thrive, Inspire, Live — No Strings Attached E-News - NSAEN is a lifestyle online magazine featuring eclectic entertainment, health and wellness tips, and your playbook to Vegas.
Contact us: info@nsaen.com
© Copyright 2019 | Designed and Developed for NSAEN, LLC