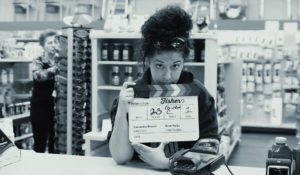 Filmmaker Cassandra Bryson is making sure 2019 will go down as the year in which her feature film, “Fisher,” will focus on the dangers of online romantic deception and make a cinematic statement on how to make a first-class film on a shoestring budget.

Now that the writer, producer, and director is 90 percent finished with the film’s production, she has tentatively scheduled its release in the fall, and fans of the talented filmmaker are excited to see her Indie thriller.

Her film promises to raise awareness about the cruel and dangerous practice of “catfishing,” a phrase used to describe the epidemic of online predators who lie to get vulnerable individuals emotionally and romantically attached to them as a vicious prank.

Bryson, better known as “Cassie B,” would be the first to admit that the making of Fisher was more difficult than she ever imagined. At the same time, her journey from writer to producer to director has been a character-defining career move that brought out the best in her as a person and filmmaker.

What have you learned about yourself while making this movie?

I have learned that I am a very determined person. I truly do live by my motto: ‘If there is a will, there is a way.’ And I’m always willing to find a way. No matter how frustrating things get on the set for whatever reason, I still push on. I refuse to give up. When it came to makeup, for example, I learned that I do well with an airbrush makeup gun.

What has been the most challenging part of this film project so far?

One of the most frustrating parts about filmmaking is having ‘Mother Nature’ cooperate. More than once we have had to adjust a shooting schedule due to weather. We also had a location drop so I had to find another one last minute for a scene. Getting everyone’s schedules in the cast and crew to align has also been rather difficult.

You said you’re 90 percent finished with production. What details lie ahead?

The editing and color grading will be done by Brian Parks, the director of photography. We will be using a professional sound mixer for the audio. The film will be sent out to get the closed captioning done and we are still looking into musical composers for the film.

Talk about your budget and how challenging funding has been thus far.

We had about $3,200 to start with from the Indiegogo (an international crowdfunding website), which the cast and paid extras took up more than half of that. I have run up my credit cards in order to pay for things the set has needed. My director of photography has rented some equipment out of pocket in order to get what we needed. I am also currently working two jobs.

What makes your production team and actors so committed to getting this project made?

We have worked together on projects before. The cast has said the reason they are dedicated to this film is that they believe in the storyline. The crew is also supportive of my director of photography and they’re friends of mine as well.

How innovative and resourceful have you had to be to get to this point?

I am blessed in the fact that two of the locations used for the film belonged to a crew member and her boyfriend. As for everything else, there were a lot of phone calls made and visiting places in person to ask to use locations. I spent countless hours making props needed for the set-in-order to save money for other parts of the production. I took on a second job in order to pay for whatever else the production needed. The Indiegogo funding only went so far.

Alfred Hitchcock and Mel Brooks appeared in their films. Is that something you may be interested in doing?

I do have a cameo in this film. There’s one where I am seen and others where my hands are stunt doubles for certain scenes. 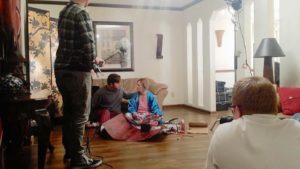 Your film is both a suspenseful thriller and a cautionary tale. What do you hope “Fisher” will do for your generation and future generations?

What I hope people will get from this film is that they need to be more mindful of who they talk to online and think of the consequences for their actions.

With the arrival of hundreds of Independent and studio films in 2019, there will be plenty of movies for audiences to choose from, but few films are likely to entertain and educate the way Cassandra Bryson’s “Fisher” is aspiring to do.

Bryson said she is looking forward to entering her suspenseful thriller in the 2019 NSAEN Online International Film Festival and other upcoming Indie film festivals. Check local listings and entertainment news for further information on the premiere of “Fisher.”