The Red River Gorge is a climbing destination known around the world and ever since I started climbing, it was a goal of mine to climb at “The Red.” I had my first opportunity just a few weeks ago with Paradox Sports, an organization that helps adaptive climbers get outside. Prior to this outing, I have been on multiple trips with Paradox in various parts of the country. Some of those included climbing Long’s Peak in the Rocky Mountains and Joshua Tree in California.

I hail from the city of Chicago, so the trip began with me driving down with one of my early climbing mentors who helped me get started in climbing. The drive took about seven hours. Once we reached our destination, it was time to meet the other climbers on the trip and prepare for the weekend of climbing in Torrent Falls.

The next day we headed out to the climbing area, and I was excited to jump on some routes at Torrent. The first thing I noticed was the climbing was a little more challenging than some of the other areas I’ve climbed in throughout the country. I was sort of expecting this because all of my friends that have visited “The Red” told me the routes can be challenging, so I went into the weekend without preconceived notions of how well I would do while on the rock. 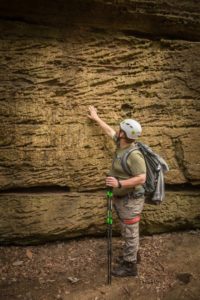 The weekend at Torrent overall went better than expected, and I was able to work several routes and top out two of the routes I was working on in the area. “The Red” is known for its sport climbing, but while with Paradox, I only worked on routes on top rope. I myself have not yet entered into sport climbing but plan to work my way into it very soon.

Sport climbing is different than top roping in that when you climb sport routes, you place quick draws on bolts then clip the rope through the draws to help protect in case of a fall. I have only practiced this style of climbing in the gym—it’s known as mock leading. This means that a top rope is the main protection, and a dummy rope is tied to the harness which allows the climber to practice clipping the rope through the draws on the wall.

The goal I have in the next several months is to start leading sport routes in the gym in order to take my sport leading outside. I hope to then head back to “The Red” to undertake some of my early sport leads on easy routes to gain the confidence on real rock. Hopefully, over the next several years, I will be able to work my sport climbing abilities up in order to tackle some of the harder routes in “The Red.”

I have to thank Paradox Sports for allowing me to join them on the trip to “The Red.” It will be a memorable first time to this world-renowned destination for years to come. I truly gained an appreciation for climbers that push their limits in such an iconic destination, and maybe one day I will become one of those hard climbers that take down some of the classics in the area. Until then, I will keep practicing my climbing skills and traveling around the country to increase my skill on real rock in order to one day become a great leader on rock.