Once filmmaker Cassandra Bryson decided to write and direct a movie dealing with the dangers of online romantic deception, better known as “catfishing,” she produced an intense script designed to sound the alarm about an increasing number of people becoming mentally and emotionally unstable due to fake profiles being used to manipulate the unwary.

Her latest project tackles the epidemic of catfishing where a lie, disguised by the cloak of technology, multiplies like a virus only to result in hearts getting broken once the awful truth comes out — that the person you’ve fallen in love with is not real. It was all a joke. That makes catfishing not only cruel, but extremely dangerous, says Bryson. That also makes her upcoming film, “Fisher,” a cinematic necessity to raise awareness about the risks associated with this insensitive prank. 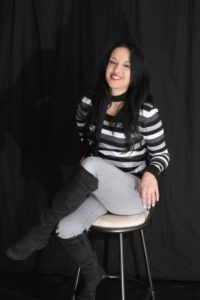 Explaining her premise, Bryson said, “Fisher is a cautionary tale about a high school senior named Clara Banks who has an unusual hobby — ‘catfishing.’ She believes it is just fun and games until she hooks the attention of the wrong person. Twisted messages start showing up at Clara’s school and home causing her to fear for her life. Leaving Clara to wonder if she will ever feel safe again, now that evil has come knocking.

“I chose a psychological thriller because I like stories that are realistic and relevant to the times. I think there are many teens online that do not realize the dangers that are out there even with taking precautionary measures. ‘Stranger Danger’ is still relevant today as it was before the Internet existed, except now technology makes it easier for people to become targets.”

According to Bryson, her low-budget thriller is in pre-production and she’s currently seeking to raise $11,000 by July 26, 2018. Anyone can make financial donations and receive some exciting perks by going to: https://www.indiegogo.com/projects/fisher-community-horror/x/11992933#/where you can learn more about the making of the psychological thriller.

Not only is she raising funds for the production of her film, Bryson is also raising money to donate to a local high school in Cleveland, Tenn. for their arts programs and lunch program.

“Two goals, one campaign,” she said. “We are seeking a total of $11,000. The first $6,000 will be used for film production.  Funds will be put towards wardrobe, set design, make up, food for cast and crew, equipment, props, music, and other necessities needed to create a quality film.  Our talented crew is revved and ready to begin production this fall. 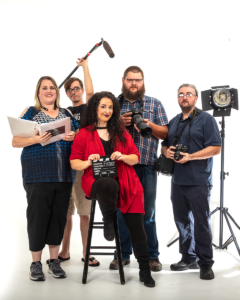 “The other $5,000 will be donated to the local high school that we use as a set location. Out of that $5,000, $4,000 will be donated to the arts programs — split between band, choir, drama, and art, because the arts are important. The last $1,000 will go to the lunch program. You cannot properly create on an empty stomach. There are 16 million children who go hungry each year in the U.S. That is 1 in 5 children! Sometimes their school lunch is their only opportunity for a balanced meal and no kid should go hungry.”

When asked why she chose a dual pro-community approach, Bryson, 34, responded, “I am a firm believer in giving back. I grew up in a limited income household. There were those that helped my Mom. I was at one time homeless as an adult and people gave me an opportunity to work to get out of my situation while letting me use a camper for a place to stay. I honestly don’t know what I would have done without their help. Ever since then I always try to find ways to help others in any way possible. I believe if people helped each other more often this world could be a beautiful place.”

While this is not the first film Bryson has been involved with, this is the first time the writer, producer, actor will be directing a story she wrote. It’s a story-line Bryson admits is very close to her heart, one that she is committed to having it realized and released to the public.

“I believe cautionary tales serve a purpose,’ she said. “They make people think twice before committing actions. Everyone has at one point been told not to take candy from strangers or watch out for white paneled vans. Not too many films have touched on the dangers of Internet stalking or showcase how easy it is for you to be found via the Internet. This is why I believe this story is important. The current plan is to put it on Amazon prime after post- production. I also plan on entering Fisher in as many film festivals as possible once post-production is complete.”

When asked which filmmakers have been the most influential on her career, the Massachusetts native elaborated, “While I love big block-buster film directors, the ones that have inspired me the most are local filmmakers. It is easy to make a film when you have tons of access to finances needed to bring your vision to life. But when you are an indie filmmaker on a budget, you have to get super creative — not just with how you shoot it, but location settings, wardrobe, finding talent, making props, and so much more! They are the ones working a 40-hour a week job while also trying to pursue their passion in film-making. Those are the filmmakers who truly inspire me! They are working twice as hard on little to no budget to entertain people. How could they not be the most admired?”

She added, “I do know what I aspire to be and that is someone who can make a positive impact on my community — a person who’s able to serve others to the best of my ability — someone who can be a light during dark times and a shoulder when it is needed.”

CASSANDRA BRYSON said her interest in film began when she was a little girl, adding, “Where other kids would play make-believe to entertain themselves, I was creating entertainment for others. I would make skits and perform them for friends and family. Now, an aspiring filmmaker, Bryson said she enjoys combining her love of film-making with helping her community. Above are Bryson with her production crew. From left to right are Brittany Parks, Zach Kinsey, Bryson, Josh Durham, and Jeff Eakin.

Nicole Kasten -
0
Are you currently hunting for a new place? Want to make sure you choose the right one? Watch for these red flags next time you’re on a tour.
Thrive, Inspire, Live — No Strings Attached E-News - NSAEN is a lifestyle online magazine featuring eclectic entertainment, health and wellness tips, and your playbook to Vegas.
Contact us: info@nsaen.com
© Copyright 2019 | Designed and Developed for NSAEN, LLC