THE GRAND OPENING OF “LEGENDS IN CONCERT” at the Tropicana Las Vegas!  Yes, Legends in Concert has moved to the fabulous Tropicana Hotel on the Strip. 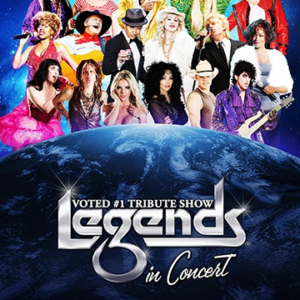 Taking over the iconic showroom where the Folies once was, home to greats such as Wayne Newton and Mama Mia, Legends will share the stage with the Purple Reign show.  Changing out their stars every three months, they start out this month with Lady Gaga, Elvis Presley, Whitney Houston, and Frank Sinatra tribute artists at 7:30 p.m.

“We are thrilled to unveil our all-new production at our new legendary home, Tropicana Las Vegas, building on the show’s three and a half decades of success, while also beginning a powerful multi-year agreement between two Vegas icons,” said Brian Brigner, chief operating officer of OnStage Enterprises, producers of Legends. “We are delighted to expand our relationship with Penn National Gaming via a long-term multi-dimensional partnership and move the flagship version of our production to the famed four corners of the Las Vegas Strip. We are grateful to our long-time host Flamingo Las Vegas, where our currently scheduled performances will continue through the end of the year, prior to commencing our performances this February at our new Las Vegas home.”
Tickets start at $49.99 each. Parking is free at the Tropicana. Tickets available at the TropLv.com box office, Ticketmaster or numerous ticketing agencies.

8 Important Things to Look for in a Game Server Host

Richard Norton -
Research shows that unique personality traits combined with a solid sales approach are what set top performers apart from everyone else.
Thrive, Inspire, Live — No Strings Attached E-News - NSAEN is a lifestyle online magazine featuring eclectic entertainment, health and wellness tips, and your playbook to Vegas.
Contact us: info@nsaen.com
© Copyright 2019 | Designed and Developed for NSAEN, LLC