Not often the opportunity is presented to interview a Judge, especially during election season. We, the average person, really do not know the extent of work a Judge has to execute. This interview gives you a brief insight into the life of a judge. 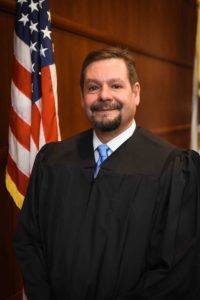 Appointed by an order of the Illinois Supreme Court, I took the oath of office on November 27, 2017, to temporarily fill a vacancy on the Circuit Court of Cook County. I am truly humbled to be the first male Latino appointed to a county-wide judicial vacancy. The election will determine whether I can keep this honorable position.

I believe that serving as a judge is a very important community service. It is a position that should be filled by qualified, experienced, impartial people who can also effectively manage a busy courtroom so that all participants are fairly treated with respect and justice. My career goal has been to be such a judge, and I have been trying to prepare myself for this responsibility.

What do you seek to accomplish if you win the election and are appointed judge again?

My one and only goal is to serve the entire community by treating all court participants fairly. There are many different kinds of courtrooms to which a Cook County judge can be assigned — traffic, criminal, divorce, probate, foreclosures, civil tort cases, etc.  Each courtroom assignment comes with a different set of challenges. I promise to constantly be open to finding the best method to meet the challenge of the particular courtroom to which I am assigned. 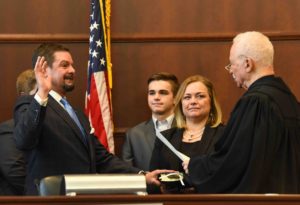 Do your political beliefs influence your decisions in running for judge?

On the bench, a judge’s personal political beliefs appropriately must be irrelevant. A judge must be fair, impartial, hear all sides of an issue, and make decisions based on the facts and law applied evenly.

What made you chose a career in law?

Both my wife and I knew that we wanted to be lawyers about midway through our undergraduate days at the University of Michigan. But neither of us knew exactly what field of law we wanted to practice, instead we saw law school as a flexible next step that could lead to many different kinds of professional career options. While in law school, I was lucky enough to land an internship in the Cook County Public Defender’s office. It was then and there that I realized criminal defense was the path for me to serve my community with autonomy and with the most direct impact on individuals’ lives. My desire to be a judge is the natural continuum to that service. As a judge, I get the privilege of serving the entire community in the search for justice.

What will your agenda be like if you win the election and once you are appointed judge again?

No judge should have an “agenda” other than the pursuit of justice. But one of the side items on which I intend to focus will be the mentorship of young lawyers. I was lucky to have some leaders of the legal community mentor me when I was young (including Judge Marvin Leavitt, Camille Kozlowski, Judge Callie Beard, Judge Ron Himel to name a few). I am grateful for the guidance they gave me. I will similarly respond when young lawyers ask me for my advice, and will try to find circumstances where I can provide guidance.

Looking back at your professional history, was there ever a situation that challenged your morals?  In other words, did you know what the person did was wrong or appalling but not enough for a conviction?

When I was a criminal defense attorney, I was sometimes asked a similar question in a more sanctimonious tone than your diplomatic question, “How can you represent a criminal defendant who you know is guilty?” My answer to both questions is that even guilty people are entitled to representation to make sure that the legal system imposes a fair penalty for the particular circumstances in that case. As a Judge, I will always look to find resolutions that best serve justice, with consistent application, for all parties and the community not just in the short term but also in the long term.

Is there a particular case that really affected you and had an impact on your life?

Of the many interesting and complex cases I have handled, I often answer this question by turning to my very first case in 1994. I was a law student working with two seasoned Public Defender attorneys and I was allowed to make a special Rule 7-11 license appearance in the case. We were representing a 17-year-old kid charged with “Attempted Murder of a Police Officer” after someone shot a bullet from a window of an old C.H.A. high-rise building into the roof of a police car. Our client was a high school student from Milwaukee who was visiting his grandmother in the CHA building. He was charged with this horrific crime based on eyewitnesses who identified him as the shooter. This 17-year-old kid missed 18 months of high school while he awaited trial because his family could not afford to post bail for him. At trial, the witnesses conceded that they only saw someone’s hand holding a gun out the window, and they could not identify our client as the shooter. Our client was wearing my suit at the time the Not-Guilty verdict was read. He turned to me to give me a big hug and whispered in my ear that he would go to law school one day to help others who were wrongly accused. I have thought about him a lot over the years.

Looking at our current society, do you believe everyone is equal in front of the law?

They will be when they walk into my courtroom. Every participant in court proceedings should have an equal voice. That is the fundamental function that a judge brings to these proceedings — to ensure an effective process that allows all participants to advocate their position such that all sides and circumstances can be considered to reach justice for that particular case, and to run that process efficiently so that all of the numerous cases on a courtroom’s docket for that day can be heard without being rushed.

The last few months must have been very stressful for you, campaigning, and working and being deeply involved in your community, is there enough time for family life and fun activities?

In a certain respect, my “campaign” to become judge began many years ago as I helped several friends in their judicial campaigns and started mapping out my path. My wife and two teenage sons are accustomed to me attending various events and being active in the community. My official campaign for this election started back in August, a total of eight months to Election Day, and I have been attending an average of 8-10 events every week. My family has been with me every step of the way in the campaign, and we often do campaign activities together. But, we do have our fun time and family time too. I am very close with my two sons and love spending quality time with them and their friends. My oldest son is a Senior and played for his highly ranked OPRF High School hockey team. I made sure that I was at as many games as possible, and continued my long-held role at home games running the music during whistle stoppages.

What are some of the community projects you are involved in and why?

Community service runs in the family. My wife was the 2004-2005 President of the Women’s Bar Association of Illinois and has served with numerous bar and civic organizations. I too have been deeply committed to volunteer service throughout my career, through many activities in the Illinois bar and my local community. Two recent volunteer positions stand out. First, I have been the President of the Madison Street Theater near my home in Oak Park. I believe in the value of Chicago’s unique version of small storefront local theater. I have particularly cared about Madison Street Theater ever since 2011 when I was cast in a production there with my (then) 10-year old son in “Animal Farm”. (http://www.oakpark.com/News/Articles/8-9-2011/All-is-Orwellian-that-ends-well/). Second, I have been active on the board of directors for the Oak Park Residence Corporation, a community based non-profit organization that currently owns and manages 22 multi-family buildings containing about 480 units of affordable rental housing. I love this group because it ensures Oak Park’s long held value of an economically diverse community and allows lower income families to find stability and safety.

How do you relieve stress?

Listening to the Grateful Dead, taking my Husky dog (Zeus) on long walks, and catching up on some of my favorite TV shows.

If you are not campaigning, working or volunteering, what kind of hobbies to you enjoy in your free time?

I’m a hockey Dad. Both my sons have played hockey and other sports, so I have spent a lot of my time involved in my boy’s activities. When there is time, I enjoy golf, skiing, theater, and travel.

What’s your vision on equality fairness?

Both my brother and sister are gay, and I am acutely aware of some of the struggles the LGBTQ community continues to have with the legal system. Though there has been significant progress on a number of legal issues, there are still many concerns that impact the community. I can think of three examples. First, comprehensive access to domestic violence courts is imperative for gay and lesbian couples. The cycle of domestic violence within the gay community often runs the same dynamic as with straight couples. There is an abuser and someone that needs help. We must train police and victim/witness coordinators to recognize and appropriately handle these types of situations. We could also use more community outreach to gay and lesbian groups so that they can become educated about how the system works, including filing for civil orders of protection when appropriate. Second, gay couples seeking adoptions, either privately or through the foster care system, are seeing improved access but could see even more accommodation. My brother and his husband adopted two children through DCFS. I was able to assist them because of my experience in the abuse and neglect system. I think that DCFS should be encouraged to seek gay and lesbian families to assist in the foster care crisis our state faces. Third, we need to have safer, more appropriate placement for transgendered individuals while incarcerated. Sometimes, a prison official thinks that the best option is to place a transgendered individual in solitary confinement for his/her/their safety. Other options need to be evaluated where appropriate, like making transgendered individuals a priority for electronic monitoring or I-bonds.

On November 27, 2017, I was sworn in as Judge to fill a temporary vacancy on the bench. That was the Monday after Thanksgiving and much of my out-of-town family was still around from the holiday. The swearing in oath took place in the Illinois Supreme Court’s ceremonial court room. The best part was seeing the way it affected my wife, sons, father, mother and father-in-law. Sharing that experience with them was the best part of my career… so far.

What’s Your Definition of Success?

Surround Yourself With People Who Push You

John Loranger -
0
Alas, he did not want to be a poet or a mystic; nor a lover, an athlete or a worker/husband/father/corpse.  What Sergei really wanted was world-destruction.
Thrive, Inspire, Live — No Strings Attached E-News - NSAEN is a lifestyle online magazine featuring eclectic entertainment, health and wellness tips, and your playbook to Vegas.
Contact us: info@nsaen.com
© Copyright 2019 | Designed and Developed for NSAEN, LLC