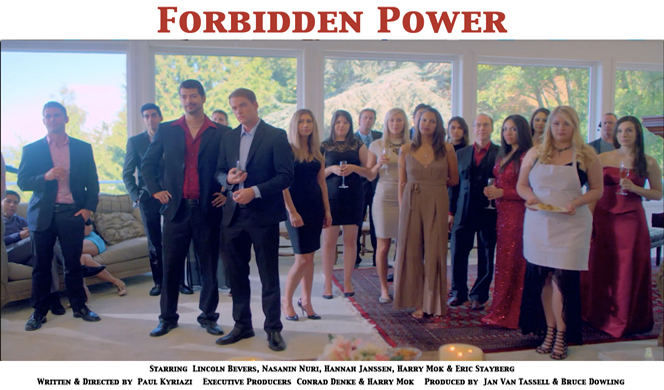 I want to welcome Filmmaker Paul Kyriazi to BTS Entertainment Corner. Here’s the beginning to Paul’s journey in his own words: “At age 8, I see “The Making of 20,000 Leagues Under the Sea” on Disneyland TV and decided to become a movie director. Age 16, I start filming 20-minute action stories using my father’s 8mm camera. Age 18, my father bought me a used Bolex camera.”

1) So, we see you started at an early age in making films. Have you always had a good support system when it came to your creative endeavors?

Yes, I did, Brian. I was lucky to have my parents support me. After I made three short, action movies in 8mm, my father was told, “If your son is serious about movies, he needs to film in 16mm.”

That week, my father bought me a used 16mm camera and tripod. A couple of weeks later, I was out filming a 30-minute action movie that won the Berkeley Film Festival. I remember on my first feature film my parents hiked a mile into the hills carrying four, one-gallon jugs of A&W root beer for the crew.

However, when I was unable to sell my first feature film, because I shot it in black and white, my parents said, “You’d better get a full-time job.” I always worked part-time so I could be available for any movie opportunities that came up. I had to learn what every entrepreneur learns:

At some point, the hardest point, you must go it alone, until you can get your next project financed.

2) You really got into the action genre and even made space launch films with NASA. How did the military background play into what you’re doing now?

I was stationed at Vandenberg Air Force base near Santa Barbara, Ca. It’s where they launch satellite spaceships. I filmed those for four years and directed training movies as well. The great thing about that military situation was us cameramen often only had one chance to get a shot. Not only of space launches, but also documenting meetings of high ranking officers, so it helped me get used to getting a good shot with no chance for a second take.

3) You’ve worked with some amazing people, who were some of your favorites? Any Horror stories? (No need to name anyone, but we wish you would, haha)

Yes, I’ve worked with 23 name actors in my movies and full-cast audio-books. They were all my favorites because I grew up watching them on the big screen when I was a teenager: Rod Taylor (The Time Machine, The Birds), Robert Culp (I SPY), George Chakiris and Russ Tamblyn (West Side Story).

So, Brian, you want a horror story with a name? Okay, here’s the most disappointing one with a twist. For my first audio-book Rock Star Rising, the stars in my cast were Robert Culp, Russ Tamblyn, George Chakiris and James Darren (The Time Tunnel). I wanted Kevin McCarthy to narrate because of the great narration he did in Invasion of the Body Snatchers.

I agreed to his $5,000 fee, he liked the story and I set him to record first and alone, since the narrator doesn’t perform with the cast. Just before I was about to head for the studio, McCarthy’s agent called me and said McCarthy had changed his mind.

Brian, I truly felt like a groom who was left standing at the altar. I was a fan of his since childhood, everything was set and now he wouldn’t go to the studio. The agent gave me no reason. I asked the agent to call him back to say it would be a friendly, low-pressure recording situation and I was a big fan.

When I hung up, I immediately got a call from George Chakiris, who was set to record the next day with all the actors. Chakiris was to play, by chance, a Puerto Rican gangster, just like he did in West Side Story. Chakiris said, “I really don’t want to do this with an accent, so I guess I’ll drop out.”

While I talked with him about how he could do it without the accent and assure him it would be an easygoing studio situation, I could hear the other line on my phone ringing, knowing it was McCarthy’s agent calling back.

I decided not to answer while I made Chakiris happy and agree to work on the project. When I called the agent back, he said, “McCarthy still doesn’t want to do it. If he was a young actor, I would force him, but not with an older, established actor.”

I sheepishly called the recording studio and cancelled the recording. Well, to make a long story short, I got Rod Taylor to narrate as he had done in The Time Machine and a few days later, McCarthy came in to do a smaller part of a lawyer talking with Robert Culp—about a five-minute scene.

When recording that, I could see why McCarthy had cancelled as the narrator. He was more elderly than I thought and had trouble making it through his scene, doing lines over again after he stumbled. But, when I cut it all together and people heard his portrayal of a sneaky, pushy lawyer, they said, “McCarthy’s character is the most exciting in the show.”

4) Tell us about How to Live the James Bond Lifestyle. We want in!

I coined the term James Bond Lifestyle in 1990. Now it’s used in advertising. For me to survive as a freelance filmmaker, I went to many success seminars and read every success and money book I could get my hands on.

I started using James Bond as a metaphor for freelance success. I wasn’t interested in dangerous activities or sports. I wanted to make movies, travel, live in great hotels, and have lots of cash on a money clip.

When I was making Omega Cop, various people asked me how I could survive as a freelance director with no company behind me. I would spend a long time telling individuals about various success steps. This happened many times, so I decided to record it and hand out the tapes when people asked.

I started selling the 90-minute tape on Amazon. Then I recorded eight hours on CDs. After that, The Learning Annex invited me to lecture a few times. Now, the longer Kindle SPECTRE version which is still on Amazon.

The main thing about James Bond is that, when many people fold under pressure, Bond focuses. He can call up his talent at will and deliver on a deadline. And he never whispers a word about giving up on a mission. Perseverance is the most important aspect for success. And we always see Bond go through the hardships and risks to get the job done.

My book, is not about motivation, but has real techniques for anyone to get their piece of James Bond’s exciting and luxury lifestyle.

5) I love the fact you’ve been involved with audio books. As a touring entertainer, I have listened to my fair share of them while driving. Give us a brief glimpse into that world if you will.

Instead of the single narrator type audio-books, I decided to make full-cast audios with movie quality effects, ambience and music. An audio-movie of sorts.

I changed two of the movie scripts, that I couldn’t sell, to recording scripts that lasted about four hours. The important thing is to record the scenes live with all the actors doing the scene together. Sometimes that required five mikes.

I did no rehearsals and just recorded the scene as the actors did it. If an actor made a mistake, I would keep the sound rolling and they would just pick up the scene from that line. Later, in editing, I’d cut out the bad line. Once all the scenes are finished, I would combine that with the narrator and then go to sound and music.

There are some good sound effects libraries on the internet such as sounddogs.com where you can search and listen to half a million effects and download the ones you want for $3 to $5 each. They also have music there with various prices depending on length. The search for the right effects is the most fun of the process, I think.

I’d like to remind artists that all creative projects take money. And if you want to move ahead by producing your own movie as I have done in the past and with Forbidden Power, you have to learn how to deal with fear and doubt. 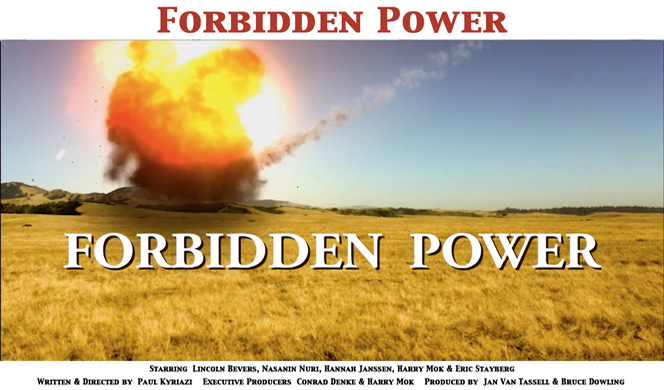 Fear of losing your money, making a bad movie, and the worst—not completing the movie at all because of running out of cash mid-way. That’s really scary. Using someone else’s money does not relieve that fear because you are responsible for it and have a nagging partner forever if you fail.

So, I recommend to not do ‘just any movie’ for the sake of making one. But to choose one story that is in your heart, that you must make, so you’ll never regret not making it. Make a movie that shows what’s inside you. A movie you really want to see yourself. A movie that no one has made quite like yours. That’s the movie, the book or project to do.

7) HUGE CONGRATS TO FORBIDDEN POWER, your film that is just coming out. Give us a brief synopsis, your thought on the film and anything else you want folks to know about it!

Thank you, Brian. I’ve mentioned that I studied success, empowerment. So naturally, I like empowerment movies such as Limitless and LUCY where the heroes get their power by drugs, Wolf where the power comes from an animal bite, or by fantasy means as happens in some Twilight Zone episodes.

However, I’ve never seen a hero empowered via sex with a mysterious woman as in my new movie. In real life, women often empower men for success by sharing themselves, so why not a woman who makes a man a lot smarter and stronger via her body in bed.

And if that women gives power to the hero, the suspense of the story is: What would the man do with that power? Where did the woman originally get her power? And why did the woman choose the hero to give it to?

I also have the woman leave the hero a cryptic message: Short Red Train. What does that mean? So, there are now enough questions for an audience to sit through 95 minutes of movie to find out the answers.

Thanks, Brian. It’s been a pleasure talking movies with you. 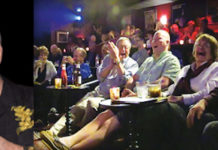 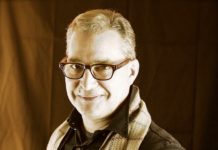 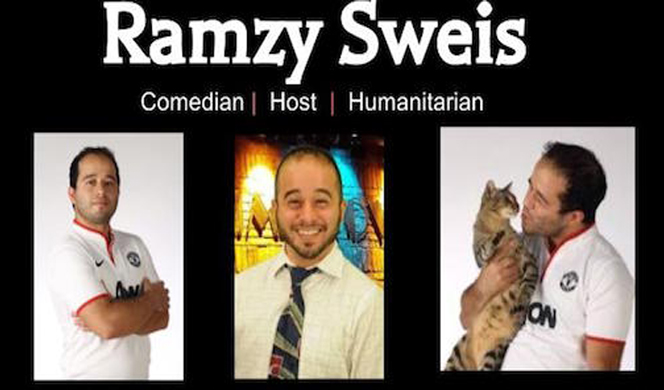 Tamara McClure -
0
Comedian Ramzy Sweis Has Mastered The Art Of “Why We Never Repeat Jokes”...