IF IT IS, THESE LEGENDS ARE GOING OUT ON A LOW NOTE

Yikes. Where to begin on the awfulness of the new Netflix film The Last Laugh?

There’s a trend happening with some of our aging actors that the films they appear in are becoming more and more shoddy. What fate wheel was spun where 88-year old Clint Eastwood can keep making and appearing in respectable and challenging films like Sully and The Mule and fellow Oscar winner Richard Dreyfuss gets condemned to movies like The Last Laugh? For decades, Dreyfuss has been such a rich talent, it’s a shame. Hopefully he rebounds soon.

Dreyfuss plays comic Buddy Green, living the retirement community life, fifty years after show business. His former manager Al Hart (Chevy Chase) finds himself in the same retirement home and he convinces Buddy to return to what they’re both good at, hitting comedy clubs across the country. The result, however, is a lot of flat codger jokes and straight failure of this movie about comedy to be funny. The film could salvage itself by succeeding at the relationships, but unfortunately, those are ham-fisted and hacky as well.

All good road movies at least lean towards the characters solving differences or searching deep inside to better themselves, but those moments aren’t there. Instead, they stop at numerous places to perform and plot gradually moves forward with jokes that aren’t there either. Occasionally there are “bits”, like tripping on ‘shrooms or explosive diarrhea, but they are executed as if Dreyfuss and Chase are as fully aware as we are that it’s a lame bit.

So, how about romance, does The Last Laugh do that effectively? Sadly, no. Andie MacDowell enters halfway through their trip as a love interest for Chase (which has NO chemistry, not helped by their fifteen-year age disparity). MacDowell dutifully relays the words she’s supposed to, and occasionally looks like she’s having fun, but all that was natural in Groundhog Day is forced here.

Technically, writer/director Greg Pritikin isn’t doing the production any favors, either. The cinematography has the crisp, digital feel of a movie they knew all along would never play in theaters, so the cinematic value of other old people adventures like Nebraska and even The Bucket List doesn’t resonate. The whole film does become ambitiously cinematic during a musical sequence, but to no real effect, story-wise. The score often does a disservice to scenes that could work, occasionally changing its pace and style before the scene changes its narrative tone, forecasting what’s going to happen, then demanding you feel a certain way. It’s way, way too present.

Is this Netflix’s fault? You CAN be selective, Netflix and not fund every movie that comes along. They want to be uttered in the same breath with other studios, so maybe they need to produce crap and prestige pieces at the same time? The Last Laugh and multiple-Oscar-nominee Roma came out within a month or so of each other, but just starting out, maybe Netflix should’ve made a name for itself by being cautious, not prolific.

But, there are better places on Netflix to see these actors, Close Encounters of the Third Kind, featuring Dreyfuss, is streaming (for now) and Chase is a guest on Norm Macdonald Has a Show as was as loose and charming as I’ve seen him in years. And if it’s the adventures of older people you want, Netflix is also home to The Kominsky Method and Grace and Frankie. It’s especially worth noting that Grace and Frankie is a sitcom that has eighty year-olds in it, not necessarily a sitcom about the struggle of being an eighty year-old. This freed up the writers to focus on the relationships, which The Last Laugh could’ve stood to do.

There, I’ve answered my own dilemma brought up at the beginning of this review. That wheel of fate that damns some aging actors and allows some to flourish – it’s the script. It’s always the script. 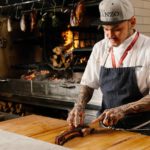 Advertise. Be a Sponsor. Donate.
Spread the word.

Get updates straight to your inbox.

Surround Yourself With People Who Push You

Should You Refinance or Recast a Loan?

Should You Refinance or Recast a Loan?

Nicole Kasten -
0
Refinancing your mortgage can be a smart way to reduce your interest and lower your costs — or even pay off your loan sooner.
An online magazine for every age and culture bringing not just news, but articles that cover entertainment and lifestyle while also highlighting everyday people in communities around the world. We aim to inspire and celebrate real-life humankind with stories that matter and bring positive and feel-good vibes with a touch of tears and smiles to the reader.
Contact us: info@nsaen.com
© Copyright 2019 | Designed and Developed for NSAEN, LLC