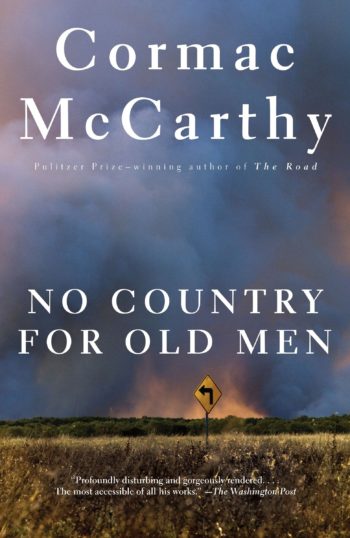 ‘I think if you were Satan and you were settin around tryin to think up somethin that would just bring the human race to its knees what you would probably come up with is narcotics.’

That is a quote from the novel, “No Country for Old Men”.  It was published in 2005 and was followed by a movie adaptation just two years later.  In some ways the book is better than the film, but the opposite is also true.  In the end, in terms of quality, both book and film are just about equally good.  In some ways they are great.  Moreover, they seem to me to be charged with an almost prophetic power.

The main “old man” of the story is a Texas sheriff named Ed Tom Bell.  He is investigating a drug-deal-gone-wrong in which a large number of criminals were murdered by each other amid an isolated desert rendezvous-point.  Though no novice when it comes to dealing with violent crime, he perceives in this massacre an element of evil that is new to his experience.  That element is personified in the sinister figure of Anton Chigurh.

Chigurh is a hired killer in pursuit of the money that was stolen from the meeting place in the desert.  His target is a Viet Nam war veteran named Llewelyn Moss.  While Moss is an able man and no fool, it soon becomes obvious that he has placed himself—and his loved ones—in extreme jeopardy by consenting to touch the drug-money that he chanced upon while hunting.

All of the characters in “No Country” are good, but Chigurh is the one that stands out.  He is not a mere villain; his stature is more mythological or biblical, like some dark force that a wrathful deity has unleashed from hell.  Everyone whom he encounters ends up dead or at least deeply troubled.  No character that I know of, in either fiction or film, has attained this degree of ice-cold malevolence.

However, even if the author is to be commended for the depth and power of such a creation, he seems too enamored of his mysterious, murderous prodigies like Chigurh (others of this ilk show up in “Blood Meridian”, another McCarthy book).  A perverse relish seems to accompany the manner in which McCarthy subjects regular folks to the ways of lawless creeps and portentous sociopaths.  Also, the descriptions of violent acts are almost always morbidly graphic.

Despite these very real shortcomings, Cormac McCarthy is without doubt a formidable talent.  “No Country for Old Men”, in particular, is a gripping work for readers who enjoy a dark, unsettling ride.

Mobbed Up: The Fight for Las Vegas Part Three

Shelley Stepanek -
0
Here is an update of some of the things now happening in Las Vegas.
An online magazine for every age and culture bringing not just news, but articles that cover entertainment and lifestyle while also highlighting everyday people in communities around the world. We aim to inspire and celebrate real-life humankind with stories that matter and bring positive and feel-good vibes with a touch of tears and smiles to the reader.
Contact us: info@nsaen.com
© Copyright 2019 | Designed and Developed for NSAEN, LLC