When Andrea Emanuela Bossoni set out to write, produce and direct her latest film, Second Chance, little did she know how much attention her short film would receive and the rave reviews she’d get for telling a simple, thought-provoking story that is gradually becoming a cross-cultural, international phenomenon. 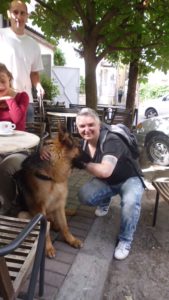 She describes her cinematic journey with Second Chance as “a hard but deeply fulfilling work that was an enriching experience for me as well as for the cast and crew of both countries.”

Born and raised in Milan, Italy, the award-winning filmmaker gave an up-close and personal interview exclusively to NSAEN regarding her life and her latest labor of love. — Second Chance.

Bossoni was born in 1974, during the time when France’s health minister, Simone Veil, a woman who survived the Nazi death camp at Auschwitz and defied institutional sexism to spearhead a law legalizing abortion in France. She grew up intellectually stimulated and socially conscious with an increasing awareness of her own identity and what she wanted to do with her life.

“My mum was and still is an independent, brave and strong woman who raised me with love and discipline,” Bossoni said. “My mum’s family — my aunt, grandmother and grandfather — were simply wonderful. Each one of them was a ‘berakah’ to me, a Jewish word meaning ‘gift’ or ‘blessing.’ I was loved, supported and always encouraged. They raised me with strong principles, ideals and with the concept of respect and hard work that came always first as a goal to reach. 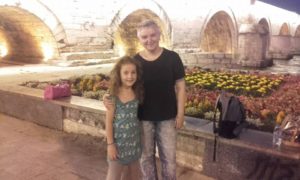 “My father couldn’t stay with us for reasons he explained to me in a letter I received when I was 19 years old. Everything after that letter made sense. I also discovered the other half of my identity. My mother’s branch is Jewish and my father’s branch is also Jewish. His parents, deported in Auschwitz (my maternal grandmother) and Mauthausen (my paternal grandfather) were both French, she was a pianist and musician, he was a professor, both Ashkenazy Jews.”

But Bossoni found that she came to life in the dark cinematic world of motion pictures — a place her mother often took her starting at the age of 3.

“For me it was the magic threshold that could turn dreams into great stories,” she explained. “I was lost in those images while the music gave rhythm to my emotions and I started to dream of becoming a film director.” 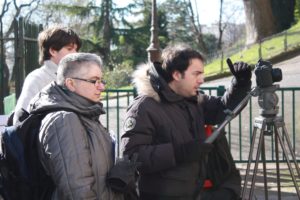 Bossoni admits she started writing as a form of therapy. “Writing,” she says, “accompanied me from childhood till adulthood. Still today, scriptwriting and the writing of novels, theatrical plays, poems and song lyrics fill much of my artistic, creative activities — even more than directing or editing.”

When asked why her latest film is resonating with diverse audiences around the world, Bossoni said, “Second Chance” has a deep message for people. Love, courage and hope can give a second chance to restart living again. Those three fundamental elements characterizing your life, my life, each person’s life — can make a difference and through them a change in a positive way can shape our present and future.”

Bossoni, who has an IQ of 185 and speaks seven different languages, added that, “Since I was little I was fighting for justice, I was standing for the rights of people who were abused or mistreated. I spent a long time observing what society was forcing people to be and to become till I decided to take a position. Homeless people, gay people, Jewish people are all ‘categories’ in a society that wants us all the same and easy to manipulate.

The differences are in my stories the inner engines that change people and people’s perspectives. Change is what makes us evolve and grow so this topic is about marginalized people who have the strength to change for good, improving their lives through their courage and hope. This is a Karma story where love, courage and hope restore dignity in a part of humanity that society doesn’t see, consider or appreciate. My film, Second Chance, discloses many realities coexisting in situations and spatiotemporal stories connecting characters that often carry their own values and visions.”

According to Bossoni, the money raised to produce the film was raised through two online crowdfunding sources, including her family putting almost 11,000 Euros of the 12,000 raised for two film productions to manage the film’s budget.

On what locations did you shoot?

“The shooting in Paris involved Montmartre quarter (in the XVIIIth arrondissement) for the exteriors in the small place next to Square Louise Michel and a very elegant house in the XIth arrondissement at Mr and Mrs Hertzfeld’s.

The shooting in Skopje involved the centre (Opstina Centar – Centar Municipality) where we shot many of the main and longer scenes in exteriors by day and night — under the bridge, over the bridge, a little further for the scene of the drawing, and in Kafe Krug in Debar Maalo for the last scene in Skopje — while in Opstina Karposh (Karposh Municipality) we shot a few other important scenes like the scene with the gypsy and the German shepherd, the scene of the sports betting agency outside and inside and where the German shepherd takes the bag with him to bring it to Nena.

Did you attend any filmmaking schools or courses?

In 1995 I started attending a two-year professional course at the Motion Pictures and TV Techniques School in Milan getting a diploma as assistant director and production manager. Later I worked in theatre at the Piccolo Teatro in Milan and as an assistant director in Moni Ovadia and his Theater Orchestra’s Il Crepuscolo delle Madri”.

A few years later I enrolled in another course to become a professional film editor and I worked in some companies as a film editor and researcher for documentaries and TV programs. Later on, while living in Skopje, Macedonia, I enrolled at the university ESRA international film school to get my Bachelor degree in Film and TV directing.

From first draft script to final edit, how long did it take you?

The first draft of the original script in English that was titled ‘The Next Chance’ was written in 2011. In 2013, it was adapted into a short story and published in a collection of new talented authors by a publishing house in Rome. After a short trip in Paris in 2014 it became ‘Second Chance’ (“Deuxième Chance” in French, “Vtora Shansa” in Macedonian) in 2015. 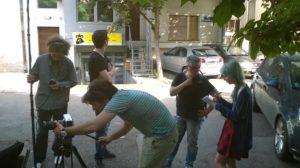 It took me more than two years from the writing of the last version of the script — written in French and English — to the shooting and post-production. Both the shooting and the post-production took place in Paris in February for the shooting and from March to May 2016 for the part of the French post-production, with my French cast and crew and a few months later in Skopje (shooting in June 2016, post-production from July 2016 till end of January 2017 due also to all the subtitles in different languages). On Feb. 9, 2017, “Second Chance” was released and celebrated. It premiered in Skopje at the Cinemateque of Macedonia and in Paris at the famous Café de Paris on February 13th 2017.”

What made you want to become a filmmaker?

Since I was three years old I wanted to be the one who would write inspiring stories to give people a smile or a different perspective and even though there were three other professions that I was passionate about — being a journalist, a firefighter or a veterinarian — the magic of the movies and the dreams they blossom in me got my heart.  The enchantment of making something unique that people can cherish and remember — the very moment in which emotions come to a higher level of consciousness and make people change — were two of the main reasons that inspired me to start this challenging career.”

Did any French or American directors influence your work?

What movies were you exposed too early in life that impacted you?

Currently, the 43-year-old filmmaker said she is looking for “a serious film distribution company” to release her positive film about the poor. With an estimated 1.7 billion people lacking adequate housing worldwide, a film that focuses on the plight of the homeless certainly deserves international appeal. So does a film that offers a dog’s perspective and the point of view of an array of colorful, resilient characters that audiences might remember long after the film is over.

EDITOR’S NOTE: Second Chance will be screened in Savannah, Ga., at the Savannah Comedy  Revue, downtown at the Bay Street Theatre on Dec. 13, 2017, as one of three short film finalists in the NSAEN Online Film Festival. The movie was filmed in French and Macedonian and is available with subtitles in English, Spanish, Chinese, Hebrew and Japanese.

Andrea Bossoni is seen posing with stars of her film, Second Chance, including German Shepherd “Miki,” young Vtora Shansa Mila, the cast and crew as well as with her director of photography during shooting in Skopje.