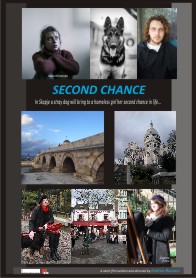 Montmartre, Paris, right side. A young priest crosses himself while watching the stained-glass windows by Max Ingrand in the choir of St Pierre de Montmartre church. Then he walks quickly towards one of the three doorways of the western facade and he goes out. He walks along the small forecourt overlooking rue du Mont-Cenis, he’s absorbed in his thoughts till he catches sight of a very beautiful young woman that he knows quite well standing a little further. She’s in front of him, with her back turned to him.

This very beautiful young woman is drawing a portrait of a very distinguished beautiful lady of around fifty years old standing in front of her with her German Shepard dog on a leash. The priest watches the scene discreetly and in silence.

The young woman ends her portrait and gives it to the lady, she takes her money, takes her tools that she puts in her rucksack and she bends her easel. In that very moment she barely turns and sees the young priest smiling at her while he calls her name: Rachel.

The young priest that Rachel calls Philippe asks to Rachel how she is. After a short friendly conversation they both greet each other while going on opposite directions. Rachel makes quickly her way towards home, along Rue Lepic while Philippe goes back to the church.

Once arrived in front of her house door, Rachel kisses the mezuzah (the doorpost) hung on the right side and she gets in. She greets her girlfriend Mélanie, she drops her rucksack and her easel off next to the entrance and she joins her in the kitchen. The girls kiss each other on the lips and share a moment of sensual intimacy while they hug each other. Later on Rachel sits down while Mélanie pours a cup of jasmine-scented tea. Immediately after that Mélanie passes to Rachel a closed envelope.

Rachel opens the envelope and reads a letter that touches her deeply. Mélanie observes her in silence. It’s a letter from her cousin Nena. Flashback. Skopje, Macedonia. Seven months earlier.

In a popular quarter of Skopje a stray dog is wandering around every day. People just avoid him passing by. In the same quarter Nena, a young homeless woman is asking for charity at the corner of a street. In the night she reaches a camp along the dock next to the Stone Bridge where she sleeps.

One night she shares some food and a bottle of wine with a small homeless family: the man plays the kaval, he has a young wife and a little girl.

Sometimes the dog goes to see Nena and gives her something to eat. Nena enjoys his company. Likewise when she has food, she shares it with the dog.

One day a young Catholic priest passes by Nena and gets close to her. He’s walking quickly in the company of a rich man. While the priest speaks with the rich man about trips to Europe and a meeting he just looks at the young woman with compassion and smiles without stopping.

One evening the priest is sat down in a sports bet agency.

He takes off his banicka with meat from the bakery bag. He starts eating a bit. Next to him three big cans of beer lie on the table, two already opened. He opens the third can and looks at his ticket.

Two young men seem to speak about the result of a football match, but the priest is drunk and he misunderstands a part of the speech. As the priest understands that he lost the bet he stands up enraged, he goes out from the agency where he throws the half of his banicka with the paper towels and his ticket rolled in a small paper in the bakery bag in a garbage can along the street.

The street dog approaches to the garbage can, smells the scent of banicka and takes the bag in his mouth.

He crosses the Vardar river and shows up in the camp where Nena usually sleeps. She’s there, wrapped in two warm blankets. The dog wants to share the food inside the bag with her.

He puts the bag close to her hand and he wakes her up.

Nena opens the bag, hugs the dog and shares the half of banicka with him. After having eaten she opens the bag to take a paper towel when she notices a small paper rolled in a ball. She takes the small rolled paper off: it’s a sports bet ticket.

The following morning Nena goes to a sports bet agency. A man working there verifies the bet and he states that it’s actually a winning ticket.

Few weeks later Nena sits at the table of a coffee bar with her dog. She’s drinking a coffee with a friend. They speak for a little while, and then her friend leaves. Nena remains alone with her dog.

She finishes her coffee and when she’s about leaving, she notices the young priest sat at few tables far from hers. He’s drinking alcohol alone and he looks sad and depressed.

Nena stands up with her dog and approaches the table. The young priest looks up. The young woman sits with him and they start to talk.

Under the sky of Paris Rachel is sat on a bench. She ends rereading Nena’s letter, her cousin who will go to see her soon. The lady of the portrait sat next to Rachel proposes her to go to drink something at the cafe nearby.

GET THE LATEST UPDATES