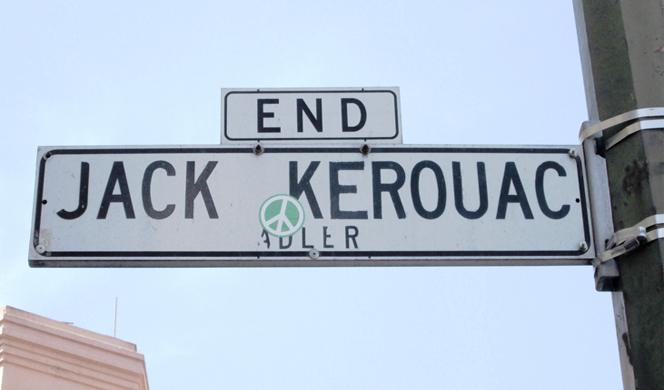 “Naked Lunch” was the first thing I read by any of the beat writers.  The author, William S. Burroughs, said that Jack Kerouac was the one who came up with the title.  I had always been interested in Kerouac, but for one reason or another I had to read Burroughs first.  When I got around to reading Kerouac, his work proved to be more rewarding by far.

I started with “Visions of Gerard”.  It is, according to Ann Charters (editor of “The Portable Jack Kerouac”), a good introduction to Kerouac’s work.  “Visions of Gerard” concerns the short life of the author’s older brother who died at the age of nine.  Nuns who had known Gerard believed that he was a saint.  Apparently Jack thought so too.  In any case, it is a touching novel that was rooted deep in the memory of its author and was obviously near and dear to his heart—perhaps more so than anything else he wrote.

But the book that made Kerouac famous was “On the Road” (1957).  It is mainly about the drug- and alcohol-fueled road trips that Sal Paradise shares with Dean Moriarty.  Sal Paradise is the name Kerouac used for himself in this novel, and Dean Moriarty is based on real-life Neal Cassady.  The writing-style is consistent with the frantic pace of the narrative, but eventually everything becomes as exhausted as the two protagonists themselves.  However, the biggest problem with “On the Road” is its hero.  There was never a time in my life when I would have been captivated by anyone resembling Dean Moriarty, whom Kerouac portrays as a kind of guru or wild holy man.  Obviously Moriarty was nothing more than a narcissistic con-man.

“The Dharma Bums” is basically more of the same, which is not to say it isn’t worth reading.  In fact, I probably prefer it to “On the Road”.  There is a memorable mountain-climbing adventure, and the narrator describes an experience of spiritual enlightenment that struck me as authentic.  There is also in this novel a pathetic foreshadowing of Kerouac’s actual end.

At the age of forty-seven, on October 21, 1969,  Jack Kerouac died of alcoholism—same year the Woodstock and Altamont Speedway concerts took place, and the Helter Skelter murders.  That strikes me as significant.  Though Kerouac was in large part responsible for the counterculture of the 1960s, it became something he had not wanted.  He became something he had not wanted.  In his own words: “Always considered writing my duty on earth.  Also the preachment of universal kindness, which hysterical critics have failed to notice beneath frenetic activity of my true-story novels about the ‘beat’ generation.  —Am actually not ‘beat’ but strange solitary crazy Catholic mystic…”

For me, nothing sums it up better.

“The Gulag Archipelago” by Aleksandr I. Solzhenitsyn

“The Big Sleep” by Raymond Chandler