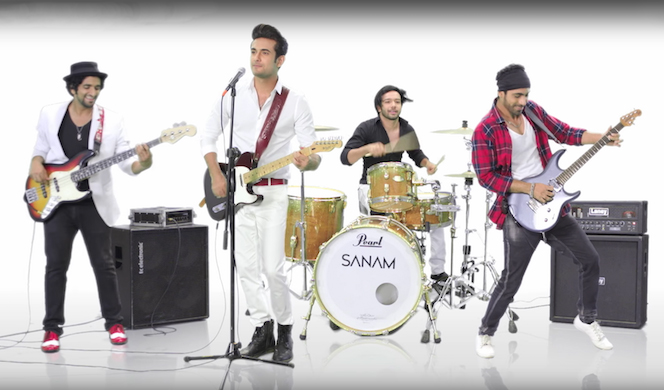 The latest release of India’s biggest and hottest band SANAM is the Fun’n’Dance Anthem that can never go out of fashion; LA BAMBA, a folk fiesta song that’s a cultural symbol dating back to the 1830s. The quartet has come up with a band version of the classic which falls in a more peppy POP genre rather than a  rock ’n’ roll one, while retaining the original flavour of primary instruments-bass (By Venky S), drums (By Keshav Dhanraj) & guitar (By Samar Puri) yet adding more synth to add a dancey-modern vibe. With Sanam Puri’s power vocals, this song is sure to establish SANAM as the force to reckon with. Also unique about this release is the teasing Chuck-Berry-Inspired rap portions sung by Venky S.

For the very first time SANAM shot a Green Screen music video for their YouTube channel which is India’s most subscribed music artist with 2 Million subscribers growing at a rapid pace. “The chroma shooting experience was new and saw the addition of new experts to the team to ensure great results,” says Keshav Dhanraj. “The video also features an old couple, a young couple, and a pre-adolescent kid couple since our fan base belongs to diverse age groups and it was our attempt at creating dance number that connects to one and all,” adds Samar Puri.

Two reasons why the band chose to cover La Bamba. “Firstly that it’s a song that will never ever grow old and secondly it will help us reach out to more geographies, Spanish being the second most widely spoken language in the world,” says Ben Thomas, the band’s Business Manager. The band is known to pick 50s, 60s and 70s songs and add their spin to it to give them a new Avatar.

The most fun part of the video that will give the fans warm fuzzies is the #FabFour swaying to the music with three rock and roll steps called Monkey, Twist, and Sticks. “They are easy steps. We had a lot of fun doing them. You don’t have to be a dancer to do them so I am hoping to see all the fans ready to groove in the coming Europe-South America tour,” adds Sanam Puri. “This song is all about dancing and having a good time… its all about rock ‘n’ roll, jiving ’n’ twisting … we hope you like it,” says Venky S.

“La Bamba” is best known from a 1958 adaptation by Ritchie Valens. 1987 saw a cover version released by Los Lobos for the film made on Valens’s life and also named “La Bamba”. This version played on the radio every five minutes reviving the rock ’n’ roll classic.

The song boasts of a rhythm that can make absolutely anyone get on their feet whether toddlers in diapers or the aged walking with sticks even if they have no idea what the words mean. The ones in 40s in their power suits have been seen going gaga over the song like teenagers.

Established in 2008, Kurian & Company, is a pioneer in India’s Talent Management Industry. It is recognised as the specialist in Artist Representation, Concert Management and Artist Promotion. Kurian & Company has played an instrumental role in building the career of legendary artists like Sonu Nigam and the likes of Vishal-Shekhar, Anushka Manchanda, etc. Our latest achievement is the roaring success of BAND SANAM which is a rage for their live performances & digital fan following. Band SANAM is the First Indian Music Artist to cross 1 Million Subscribers on their YouTube Channel and growing rapidly at a skyrocketing speed. We doubled our subscriber base in less than 5 months and stand at over 2 Million with massive engagement levels.

Toni Tomlinson -
0
Rajeania’s mother Donna hadn’t seen or thought about this neighbor in years, then one day he comes knocking on her door.