In search of the ultimate dessert, fast-talking Foody and her Mediterranean Monsieur battle wits over yummy sweets.

‘SWEETHEARTS‘ IS THE NAME OF OUR TV DESSERT SHOW/SITCOM

In Search of the Ultimate Dessert, sharp-tongued foody and her brow-beaten husband crisscross North America battling wits with comics and celebrities.

Crispy filo dough and dreamy vanilla and chocolate creamy pudding adorn this very regal Napoleon served at the appropriately named NAPOLEON CAFE in West Palm Beach. The owners scrumptious recipe is derived from their home region which is the Basques Country in northern Spain. #pastriesnotpolitics

ROBERT ZUCKERMAN (who I will kibbitz with each episode under the crawl, shamelessly attempting to convince him to use his celebrity to promote ‘Sweethearts’.)

(so you know I’m not exaggerating even a little)

PLUS THE WONDERFUL WENDY HAMMERS!!!

Wendy is an accomplished actress and standup comic who has appeared on shows such as Seinfeld, Curb Your Enthusiasm and Sopranos. She will serve as the show’s on-screen tour manager as well as Dani’s life coach. As a staunch health food advocate, she will prevent an overdose of sugar from desserts as well as from Frannie’s on screen interaction with Dani. FOR MORE ABOUT TRULY GORGEOUS AND POWERFUL WENDY: http://wendyhammers.com/

Frannie works as an international Speaker, and Humorist for audiences ranging from ecumenical and academic to alternative. Topics include: Humor, Stress Management and Diversity. She has appeared with Sid Caeser, Keanu Reeves, Seth Rogen and Mark Breslin. Frannie is the Recipient of numerous Awards and two Mayoral Proclamations (WPB/Miami) for her solo multi-character show which she based on her family story ‘Confessions Of A Jewish Shiksa’ most recently performed at The Kravis Center in West Palm Beach.

Her published play ‘The Waltonsteins (InternationalReadersTheater/Blizzard) which was an earlier telling of her family story won the prestigious Gabriel prize as a CBC/NPR Radio Documentary and was backed by the Canadian Congress. Her work has been broadcast internationally on CBC, JLTV, PBS, NPR, WTN, Edmonton TV, and The Comedy Network.

She spent many years working under legendary film director Arthur Hiller (LOVE STORY) to bring her screenplay based on her family story to the screen. A television documentary portraying her as she revisited her childhood home in Ottawa while sharing familial details as well as her association with Mr. Hiller, was broadcast on CBC Studio1.

Frannie is in demand as a Dessert Reviewer (having inherited the cheesecake gene she’s a natural at over-eating dessert!) and runs the internet vlog series “Sweethearts” running on Facebook and Youtube critiquing desserts together with her husband. The “Sweethearts” vlog is published monthly in Around Wellington Magazine, which has an enormous equestrian readership.

She currently costars together with her husband in a series of TV commercials playing herself as a Dessert Reviewer for Aztil air conditioning, now running on CBS/FOX TV. A comedic TV Food pilot called Frannie’s Wacky Healthy TV show was produced by Whole Foods. And now, a different comedic CAN-AM Food TV Pilot/Sitcom she co-created (essentially if a Dessert Show and a Sitcom had a baby), and co-starring Mark Breslin is currently in development for television.

Frannie attended Bishop’s College School in Lennoxville, Que., S.U.N.Y. at Oswego, N.Y., George Brown College in Toronto, Les Ballets Jazz de Montreal in Toronto, Second City in Toronto, and The Groundlings in L.A., as well as having completed extensive private film acting and performance training. She has acted in principal roles for a slew of indie films and television commercials. She held the recurring role of Nefertiti in the Comedy Network’s The Unprofessionals. She has been published in REFORMJUDAISM.org, Jewrotica, LILITH Magazine, and extensive blogs.

Dani Michaeli has been in the food biz for decades, co-owned a café in Queens, NY, currently owns an organic Mediterranean Food Co called DANI’S ORGANIC FUN FOOD, is a Cheffy, and puts up with his sassy wife!

Creamy mascarpone /ricotta cheese filling with candied fruit filling the crispiest shells equals a very hard time to stop stuffing our faces with the freshest pistachio, strawberry and classic Cannoli’s at the fabulous THE BOYS FARMERS MARKET in Delray Beach. 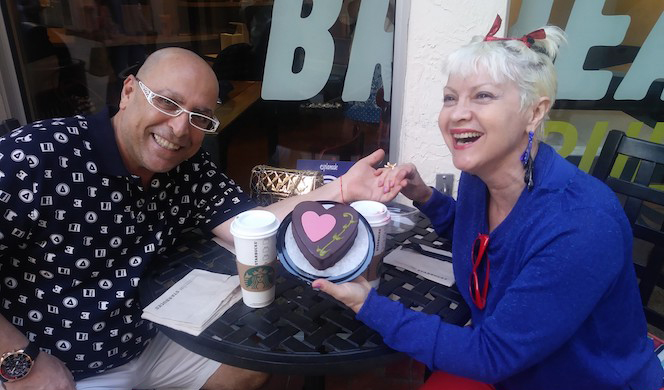 So You Have an Idea…Now What?

Jonathan Thompson -
0
The spark of genius struck you at 4 AM and you can't get back to sleep, the idea train has left the station and isn't slowing down and you have no idea where it is going.
An online magazine for every age and culture bringing not just news, but articles that cover entertainment and lifestyle while also highlighting everyday people in communities around the world. We aim to inspire and celebrate real-life humankind with stories that matter and bring positive and feel-good vibes with a touch of tears and smiles to the reader.
Contact us: info@nsaen.com
© Copyright 2019 | Designed and Developed for NSAEN, LLC