What scares many of us more than monster sharks, demonic clowns, and masked killers? Creepy little kids. Damien’s wrath in The Omen, the children of Weymouth infecting harm in the minds of adults in These Are The Damned, that awful little pigtailed blonde that was The Bad Seed, have all been effectively creepy, but none may surpass IFC Midnight’s Norwegian supernatural thriller, The Innocents. Do you dare see why? 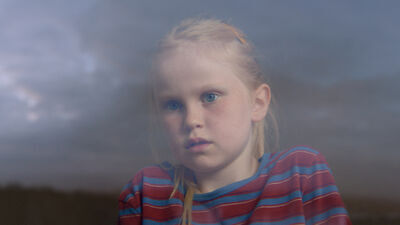 Writer/director Eskil Vogt proves once again the power of his writing and directing capabilities after having written the internationally praised The Worst Person in the World (Oscar nominated International Feature) and the much lauded supernatural thriller Thelma. His first feature as a writer/director, Blind, was a thought-provoking drama about a frail blind woman coming to terms with her condition. The film captured the attention of the judges at Sundance rewarding him with Best Screenplay along with critics declaring an auspicious directorial debut.

Vogt’s latest film is anything but innocent, focusing on four children discovering their dark secret powers when the adults are not around. It sounds familiar, but this slow-burn of unrelenting horror will be far too much for the average viewer. Vogt does not deliver his brand of evil for shock value. His cold, calculating tale slowly unfolds to reveal the darkness that resides in some children and what they are capable of – killing insects, harming animals, and causing emotional and physical pain to friends.

It all begins with innocent playtime. Young Ida, her autistic sister Anna, and their parents, recently move into a new neighborhood during the Nordic summer. Ida is jealous of her sister due to the attention she gets. She even goes as far as pinching Anna very hard, knowing that her sister will not react and does not have the capability of telling on her.

Already we are privy to Ida’s mean streak, a very possible bad seed until she meets Ben who proves to be far more sadistic. But, I’m getting ahead of myself. It starts off as little kids getting to know one another, then the whole meet and greet takes a mysterious turn as Ben guides Ida into the forest and displays some kind of psychokinesis. At first, it’s fun and games, and Ben invites Ida to discover what powers she may have.

Then there is the introduction of Aisha, a very sweet child that somehow has a sort of telekinesis and is able to communicate with Ida’s sister. Once Anna is welcomed into the fold, she proves to be nearly as powerful as Ben. This causes a rift between Ben and the others. After all, he introduced the kids’ powers to one another and he becomes meaner and deadlier.

What transpires feels all too real. As hard as it is to watch, I could not take my eyes off the screen. Vogt’s film is emotionally exhausting, near poetic, a dark fable on the fantastic side that grips your heart and may also make you dizzy from the sheer power and simplistic brutality that we are subjected to.

The Innocents toys with our emotions and packs a helluva wallop that will leave a bad taste for some. Others will consider Vogt’s film a modern day classic thriller that will bring to mind the very worst of children portrayed in horror movies: the child in the basement in Night of the Living Dead, the creepy twins, Holland and Niles form the 1972 shocker The Other, and the other set of terrible twins from The Shining. Vogt’s tale of these special children is not blatant horror. It is one of self-discovery, redemption and the line that can be drawn, even by children, between good and evil, which makes his film all the more compelling.

The Innocents is now playing in selected theaters and can also be streamed on Google Play, VUDU, Amazon Prime Video and YouTube from $6.99.