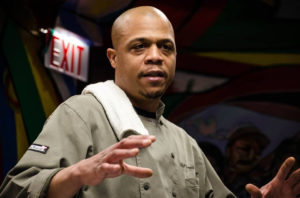 As a child, my sister and I enjoyed spending parts of our summer with Big Ma. Outside of the fact that she didn’t get an air conditioner until the late 1990s, and the only television that we generally watched were her favorite “stories” (“All My Children”, “Falcon’s Crest”, and “Dynasty”), “Saturday Night Sing” (what you know about THAT?!?), and “Highway to Heaven”, one thing sis and I could always count on was enjoying ripe, sweet watermelon on the back porch (DON’T EVEN go there; name one breathing person/race/culture who doesn’t like watermelon……yeah, that’s what I thought). There are two basic types of melons: Muskmelons and watermelons; let’s talk about them.

Some muskmelons have netted skin, such as the “American” cantaloupe, which is also referred to as plainly “muskmelon”, while others have skins that are smooth (honeydew, casaba, etc.). FYI – Cantalupensis, the “true” cantaloupe, is only commercially grown in Europe; it is said to be medium sized and warty or scaly.

Melons have been around for thousands of years, dating back to Egypt and Greece. Adding to his list of disingenuous “discoveries”, Columbus is said to have brought cantaloupes to the New World. The biggest producers are the U.S., Turkey (Casaba melons are named after a city here called “Kasaba”), and Iran. In the U.S., peak season for our cantaloupes are between June-October (with about 75% coming from California). Among the many health benefits, melons are a great source of Vitamins A & C, and also of potassium and fiber. “Cantaloupes” also help keep blood thin (prevents clotting), keeps cholesterol levels normal, decreases blood pressure, prevents development of cataracts, fights wrinkling of the skin, enhances elasticity, and good for acne. FYI: SMOKERS – Cigarettes contain a carcinogen that depletes Vitamin A in the body; cantaloupes will definitely aid in replenishing Vitamin A (just quit smoking).

When looking to choose a ripe cantaloupe, do a couple of quick things: Smell it (it should smell sweet, but not overly sweet, as it may be overripe); look at the color (you want a beige, orangish color; too green means it is under ripe); check for softness on the blossom end (opposite the stem end; like most fruits, it should give A LITTLE, but not be mushy); and check the stem end (if the stem is still attached, it will be under ripe). Avoid any that are bruised or marked. ALWAYS, and I mean ALWAYS, wash melons in warm soapy water before cutting to prevent germs from the outside contaminating the inside. FYI – If CUT melon is left at room temp over 4 hours, discard for risk of salmonella. 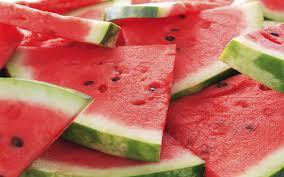 Watermelons (which are originally from Southern Africa) come in over 1,000 varieties. Other than the red/pink center that most are used to, this melon also comes in orange, green and yellow (sweeter than red). In America, the largest producers are Georgia, Florida, Texas, California, and Arizona, and peak season is usually June – late August. Also, note that the rinds can be eaten (this has been going on in China for years. The rinds are pickled and added to many dishes). Along with essentially the same health benefits as cantaloupe, watermelon also has a high level of lycopene (the most among all fresh fruits and veggies), which helps fight heart disease and PROSTATE cancer. It also helps reduce the severity of asthma. MEN: BIGGER than an FYI – Watermelons contain Citrulline (in both the white and red parts), which helps relax the blood vessels, causing better blood flow to help “straighten” things out. Even though it’s not organ specific, it’s worth taking a “hard” look at…cheaper than having to “See Alice”.

When choosing watermelons at the market, apply the same rules that as with cantaloupe. In addition, give them a “thump/pop” with your middle finger, listening for a deep “thud”. Then check the bottom of it, which is the side that lies on the ground, and look for a “yellowy” color; if it’s green or white, choose another (if picked before ripe, it won’t achieve its full flavor). As always, avoid fruits with bruises and cuts.

Remember, recipes are guides, so adjust as you see fit (but keep it healthy)!

Blend all ingredients together in a blender. Store in a tight-fitting container (squeeze bottle if possible) and keep in the refrigerator for up to 4 days. Shake before each use.

A Healthy Side Dish

Mobbed Up: The Fight for Las Vegas Part Three

Mike Aloia -
0
AHR is back at Chisel Multimedia Studio..We go Live from GA June 30, 2020
An online magazine for every age and culture bringing not just news, but articles that cover entertainment and lifestyle while also highlighting everyday people in communities around the world. We aim to inspire and celebrate real-life humankind with stories that matter and bring positive and feel-good vibes with a touch of tears and smiles to the reader.
Contact us: info@nsaen.com
© Copyright 2019 | Designed and Developed for NSAEN, LLC