Ever since I found out about TED Talks years ago, I have been captivated by the various thought-provoking topics that have been presented using this platform. I have to start by saying that I never thought I would join all of these amazing speakers who have come before me. The journey to stand on the TEDx stage was one full of ups and downs, but in the end, I was challenged as a public speaker. This was an opportunity to share many of my own thoughts to a very welcoming crowd, and I truly believe I did just that when I took the stage. 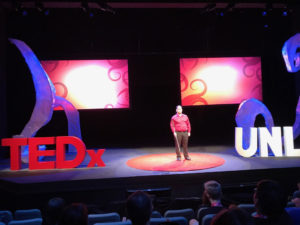 My quest began back in February of this year when I was nominated to speak at TEDxUNLV. Prior to this, I spoke about becoming a TEDx speaker with my management because I told them it would test my ability as a public speaker.

It was always the goal of my team to help me reach this point, but none of us thought it would happen as soon as it did. Especially since my transition as a public/motivational speaker has only recently begun. When I was notified that I was nominated and needed to submit my topic for review, I immediately had mixed emotions. These emotions mainly occurred in the realm of excitement and nervousness. However, I submitted my topic and the rest is history.

Prior to being selected the anticipation continued to mount, and I found myself getting nervous for no reason at all—which more or less happened when I found myself watching TED speeches. I must say that the true nervousness did not occur until the day I found out I was accepted to present at TEDxUNLV. The immediate reaction was excitement followed by me asking myself, “Shawn, what did you get yourself into here?” This was truly an opportunity of a lifetime, especially to such a young public speaker. But if done right, I thought to myself, it would really help solidify my ability on stage. I decided to lock my nervousness away so I could focus on the task ahead. 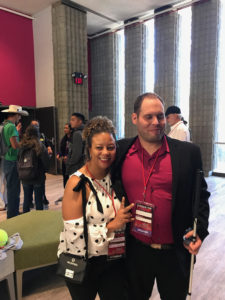 One thing I was excited about was the chance to work with a speech coach who would not only help craft my speech, but also teach me how to stand on stage to present to an audience. The first item on the list was to write the speech and then give it to my coach for review; and since I already had it written, I submitted it as soon as possible.

When my coach returned my speech, one of the first comments was how much she enjoyed my narrative style of writing. But there were some areas that we needed to work on, which was structure, in order to improve the flow.

We must have worked on this together for almost three weeks before it was stage ready. The next step in the process was probably the most difficult for me, since this is where the performance part is probably the most crucial in order for the topic to be presented well to the audience.

In my everyday life, I tend to be a very monotone person with moments of inflection with my words. If you take a moment to think about that, it does not really mix well with a person you want to listen to on stage because it would put the audience to sleep. If I did this with my speech, Finding Beauty Through Adversity, then it had the potential to be a snoozefest. That is almost the exact comment I got from my coach, especially since I talk about one of my many rock climbing trips, along with my journey through vision loss.

When I gave her my speech she could see where there should be tension and then release of that tension, which would keep the audience engaged with my topic. But the first time I recorded myself, she told me that my lack of emotion, due to my voice, was not creating the desired effects needed to pull this off. In order for me to reach this point, I would have to find a way to invoke this emotion in myself which would, in turn, allow the audience to feel what I was feeling in that moment. I spent hours upon hours working this into my speech until finally, I was able to reach the point where I could incorporate the emotion needed for my presentation.

Overall, I must say this speech really forced me to confront some of my inner demons that I have been in battle with for many years. Some of these demons range from the fear of public speaking all the way down to questioning my very existence on this earth, as I mention in my talk. Today, I feel I am a much better speaker now than prior to starting this journey to TEDxUNLV.

This realization came only after the event was over on June 22, 2018, because up to this point, I was so focused on not screwing up that I could not see how much improvement I made along the way. This was especially evident to myself during rehearsal time the day before the event was to take place.

When it was my turn to step onto the stage to rehearse, I made it one-third of the way through the speech before I blanked out. The first thing that went through my head was, I cannot believe I forgot my speech because I spent hours upon hours on it and I could say it in my sleep. In all, my blankness lasted only about fifteen seconds, but it felt like I was up there for five minutes not saying a word. I also made the critical mistake of saying sorry, but I was able to find my words which allowed me to finish. 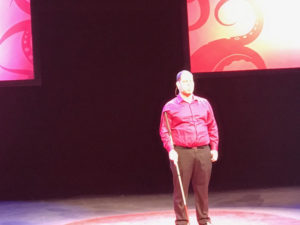 Once I stepped off the stage I immediately began to beat myself up, which was not doing me any good, so I had to take a moment to breathe and step away from the situation. I actually gathered my stuff and since I was done with my rehearsal, I left the building to step away from the entire event so I could clear my thoughts. That night I got some food and tried to get a good night’s rest prior to the start of the event the next day.

Once I got to the venue, I just tried to stay calm in order to not focus on the previous day’s screwup. It was working until it was time for me to get make-up on and the microphone set up for my turn on stage.

When it is almost time to take the stage you, as the speaker, stand in the wing listening to the previous presenter, so you are able to almost get a feel for the audience—all the time the nerves are beginning to take over the body. When it was my turn to step on stage it was almost like an out-of-body experience, because it was like everything just happened while I was watching myself give the speech. The nerves never seemed to take over my body that time on stage, and I made it through the talk with no issues. I felt that I absolutely crushed it!

This experience of speaking at a TEDx event will stay with me for the years to come no matter what other stages I step on in the future. This is what I will associate with the moment my public speaking career truly started. I honestly believe that if I did not have this opportunity, then I would not be a much better speaker than I am now.

It was the hours of dedication, along with the emotions that I uncovered from some deep parts of my soul, that allowed me to come off the TEDx stage with a positive view of myself going into a speaking career. I came to the realization that I can be a great motivational speaker, and my words really can reach those around me.

The whole reason for me getting into motivational speaking is to change the lives of others, as well as still helping me to grow through my personal struggles in life. I look forward to sharing many more of my experiences and parts of myself that were not featured in my short time on the TEDx stage. I hope that all of you will join me on the journey to Finding Beauty Through Adversity.