OUR VACATION WITH MJ

A True Tale of The King of Pop

What would you do if the world’s biggest superstar suddenly invited himself on your family vacation?   Back in 1991 this actually happened to the Goldstein family of Orlando, Florida.  In a bizarre twist of events, Michael Jackson actually went on vacation to Bermuda with the Goldstein’s via child actor Macauly Culkin.  Luckily, Alan Goldstein videotaped the entire trip, but never released the footage—UNTIL NOW. 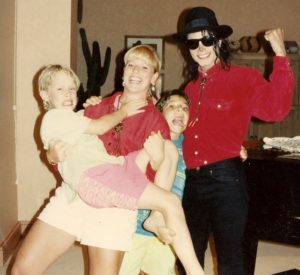 In a new television special Alan, Lynn and their son, Brock, talk about their phenomenal, once-in-a-lifetime experience of hanging with Michael Jackson—at the very height of his fame.  The program also includes intimate, home-movie footage shot by Alan Goldstein and a wealth of personal photos from the trip. (The special is now in pre-production.)

Our Vacation with MJ not only shows Michael Jackson as we’ve never seen before but provides an intimate glimpse into the troubled yet innocent world he lived in.  “I was shocked when he got off that elevator for the first time,” says Alan Goldstein.  “I didn’t believe it was really him but, more importantly, where was everyone else? I mean no handlers, no agents, no groupies, just him, all by himself.”

This quiet, little get-away turned into an extended fun-filled, escapist dream of an adventure. Money was no object and things got wild when the richest star of his day decided to party— five-star hotels, a bottomless shopping spree at a toy store, a stomach-churning speedboat ride with Ross Perot, water gun fights, pie fights, drive-by water gun attacks, ocean swims, and more. 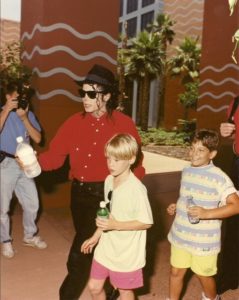 This was possibly Michael Jackson’s last, fully free, innocent time to do as he pleased before his life started to close in on him with mind-numbing accusations of molestation and criticism for his off the wall behavior.  This was MJ’s last, innocent hurrah.

In 1991 Brock Goldstein was ten and an aspiring child actor.  He happened to get cast in a Macauley Culkin film that was shooting in Orlando, “My Girl,” and developed an immediate friendship with Culkin. Several months later, when Brock’s parents announced that the family was going to Bermuda on a vacation, Brock asked if Macauley Culkin could come along.  Alan and Lynn said yes.  Then, a few days later, Brock mentioned that a friend of Macauley’s wanted to join them in Bermuda.  Alan Goldstein explains: “So, I said to Brock—who’s the friend?  And he goes, ‘Michael Jackson’ and I thought it was just the fantasy of a ten-year-old.  But when we got to Bermuda, who shows up the next day but Michael Jackson!”

Michael Jackson was desperate to re-capture his stolen childhood and escape the non-stop glare of the media.  Jackson’s friendship with Macauley Culkin apparently allowed the child inside him to come out.  The Bermuda footage shows a surprisingly unguarded Michael Jackson literally re-living his childhood with two ten-year-old.  “I think that was one of the few times he was able to have that sort of freedom,” says Brock Goldstein.  “It seemed like he didn’t want the vacation to ever end.” 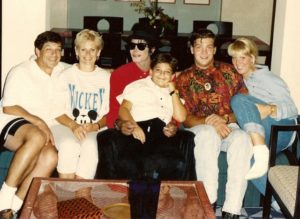 Our Vacation with MJ also explores the reasons behind Michael Jackson’s yearning for childhood play and why he was wary of adults.  “Kids are honest,” Jackson told Lynn Goldstein one evening during the trip.  “You can trust them.  I haven’t been around hardly any adults that haven’t ended up wanting something from me.”

Our Vacation with MJ is being produced by two Chicago-based production companies—Media Process Group (MPG) and Windy City Images.  MPG is in their 27th year and regularly shoots segments for CBS’ 60 Minutes, HBO’s Real Sports, NBC’s Dateline and PBS’ Frontline.  Currently, MPG is shooting Oprah’s Next Chapter for OWN and the behind-the-scenes segments for the Starz series Boss.

Getting Your Career in Music Started: A Guide

8 Important Things to Look for in a Game Server Host

Richard Norton -
Research shows that unique personality traits combined with a solid sales approach are what set top performers apart from everyone else.
Thrive, Inspire, Live — No Strings Attached E-News - NSAEN is a lifestyle online magazine featuring eclectic entertainment, health and wellness tips, and your playbook to Vegas.
Contact us: info@nsaen.com
© Copyright 2019 | Designed and Developed for NSAEN, LLC