UNPROTECTED: Boxing as a Sport, a Business, Entertainment and Social Commentary

Imagine a restaurant filled with boxing greats – fighters, trainers, managers – all trying to talk over each other with their stories of “back in the day” and “remember when,” as they are excited to see one another, catch up, and inspire up and coming fighters and others interested in that testosterone-filled industry. 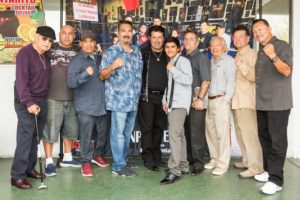 Looking like a low-rider club without the cars, these gentlemen were happy to share and relive the excitement that boxing brought to their lives. The occasion was a book signing by former Boxing Champion, Alan Santana.

Known in the ring as “The Matinee Idol,” the still handsome Santana started fighting at age eight in order to protect himself from being bullied in school. His father Armando, a former professional fighter was eager to teach his son the art of boxing and Alan excelled as an amateur at a very early age, developing a wicked left hook and a style that emulated his idol Muhammad Ali.

After many amateur successes including earning a spot on the California/ USA Boxing Team from 1982 through 1984, Alan turned professional at age 27 but after having only 10 professional fights under his belt his boxing career was cut short due to a serious accident. However, during his time in the gym he had absorbed everything about the sport and had witnessed the lifestyle many fighters lived. His father’s words of wisdom kept springing to the forefront of his mind. In a sport that was unforgiving, Alan had heeded his father’s advice but witnessed many others who wound up broke after making hundreds of thousands of dollars.  He felt that it was a good idea to teach young fighters about the ins and outs of the sporting business so that they would not wind up in the same condition as many fighters before them.

Thus, “Unprotected: A Tactical Approach to Boxing, Business, and Life” was born.

Author Santana states: “I have seen too many professional athletes make millions of dollars, only to wind up completely broke; in many cases after their respected careers are over or, in some instances, even before they are over.”  Santana, who has held various positions in the boxing world for over forty years’ also said “In today’s world of sports and business, you need to be educated on the many details that are not taught in the portals of higher education.”

The training for boxing provided Alan with a daily regimen which prepared him for events that took place during his life. He calls it the “no quit attitude” which helped him find success not only during his boxing career, but in his business along with all other endeavors he pursued outside of the ring. Having discipline and the right attitude are important messages that he hopes the youth of today will adopt in order to help them not only obtain their personal goals, but to overcome any obstacles that might stand in their way to reach that goal.

Alan Santana seeks to mentor young athletes as well as the professional in navigating his or her career on the financial side of sports. The book teaches fighters or professional athletes about every aspect of the sport from management to contracts, to be successful in managing beyond their athletic accomplishments. “Unprotected” provides insight and vision to direct, protect and educate, instructing in the skill of success with knowledge and wisdom. Santana brings authority to the table from his many years’ experience in the boxing world, providing a quick reference guide for professional boxers, athletes or anyone who is looking to get into business of sports for themselves.

“Unprotected” is no boring “how to book,” Santana enlightens the reader about the history of the sport and how it migrated from Europe to the United States, evolving into the sport it is today.

Currently, Alan Santana feels it is important for him to share his experiences; he has held many positions such as the President of North America for the World Boxing Foundation as well as being an international boxing judge. “For me it’s being able to give back to the sport, or teach some young kids the ropes about the business side of it, or just even being around the sport keeps me busy and happy.”

Santana also established an organization called “No Teen Riders” which helps to educate teen drivers along with their parents about laws and regulations that surround these young drivers. “I saw an opportunity to educate parents and teenagers about driving, bringing awareness to the plight of these teenagers when they get into a car, and safety behind the wheel. Due to many budgetary cuts there is a lack of programs in schools to educate these young drivers. Every day six to eight teenagers lose their lives on the road. “No Teen Riders” helps save lives. Whether you call it giving back or paying it forward, Alan’s life exemplifies these concepts.

Alan Santana has had the opportunity to develop other skills while in the sport of boxing using his charming, friendly demeanor. Look for him in the future to use those skills to bring the world of boxing to the masses.

“Unprotected: A Tactical Approach to Boxing, Business, and Life” can be purchased at http://alansantana.com/shop/