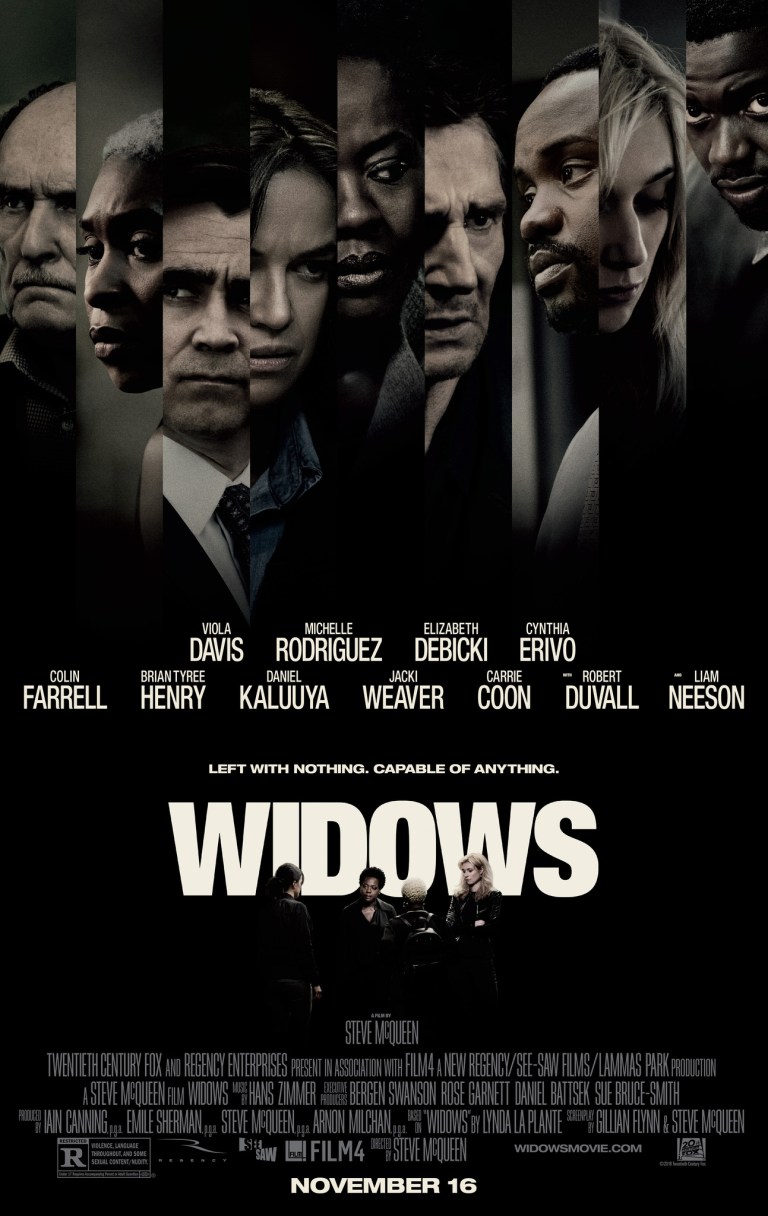 Et tu, Steve McQueen? You showed so much promise and nuance, did the producers rein things in that much? Widows could’ve been your The Friends of Eddie Coyle instead of relying on familiar tropes and twists no one really cared about. Co-writer Gillian Flynn can only take so much of the blame. Widows is a crime drama that quickly turns into an Ocean’s 8 but with life or death consequences instead of just pulling off a caper.

The film has a promising start, showing the getaway from a job that didn’t go as planned, shot in an impressive long take intercut introducing our main characters…but this is a film called Widows. so you know the husbands will be dead soon. There are a lot of big names in the film but Viola Davis takes the lead as Liam Neeson’s widow. She comes off as very guarded, strong but holding so much pain inside. Viola does a great job carrying the role, despite having a few scenes that go a little over the top with drama. Her and the other widows played so-so by Michelle Rodriguez and Elizabeth Debicki, soon find out that their husbands ripped off the wrong guys and now have their debt to pay back, or else.

On top of that main story, there is also a story involving Colin Farrell’s character, for some reason the only character with a heavy accent, running for alderman against local crime boss Jamal Manning, who happens to be the person who was ripped off. And on top of that, there are scenes showing the struggles of the people of Chicago be it corrupt politicians or police brutality. To say that there is a lot going on is an understatement. The widows end up finding the heist plans for a job their husbands didn’t do so they can pay off the debt and the audience is forced to suspend disbelief as regular citizens soon become expert crooks in such little time.

Farrell and Brian Tyree Henry, as Jamal Manning, both seem like odd choices for the film and neither character fully works, especially Farrell who sounds like he’s possibly from Boston when he’s supposed to be a Chicago native. Manning’s right hand man and muscle is played expertly by Daniel Kaluuya. He’s very scary and threatening in the role and is someone you don’t want to be your enemy. For the few moments he has, he is very much a standout. Another minor character that stood out was played by Cynthia Erivo, who easily could’ve been just a side character but she really brought out lots of depth in such little screen time. There are some other big names that just seemed wasted in the film like Robert Duvall, Jacki Weaver, and Jon Bernthal – their characters could’ve been played by anyone and merely bloated the already long runtime.

There are only so many things in the film that really make it feel like a Steve McQueen film as opposed to just any other forgettable heist movie. He has some scenes showing off his expert camera work and long takes. There is an unforgettable shot that is all him involving Colin Farrell’s character leaving a speech in the inner city. The camera is mounted on the front of the vehicle so we see the passing city as he has a conversation with his aide, soon we’re in the rich area and we see the difference and divide in the same city not so far from each other. It is a great shot that says so much without really trying so hard. Unfortunately, there aren’t more of his touches throughout the film to add to the experience as a lot of it feels like a paint by numbers film.

I never felt like there was something at stake, either due to the way the film was written or just the way it’s filmed. Things just continue to conveniently go to the characters’ advantage, only sometimes with a little struggle. Because so much is going on in the film, it does feel like a lot of the characters’ motivations for doing anything are just to keep the plot going as opposed to acting in a way of solid reasoning. It reminded me again why I did not care for Gone Girl. There are a lot of ‘why?’ questions left unanswered. It was disappointing that McQueen couldn’t make a better version of this film and I can only hope his next one will be better because I really enjoy Hunger and Shame. He has lots of talent and is great at telling a difficult story in a harsh and beautiful way.