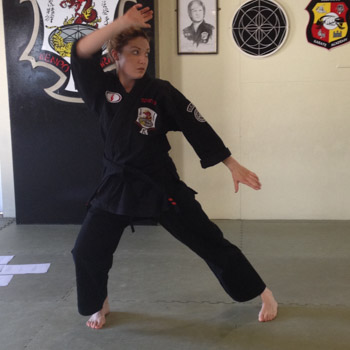 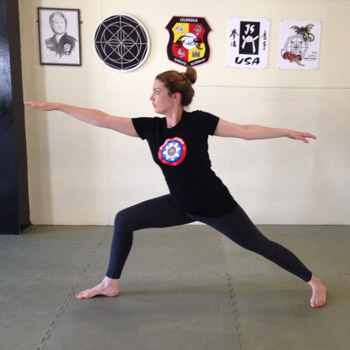 The practice of yoga requires the body to create physical movements and postures combined with deliberate breathing techniques to reach a flexibility, openness, strength, and balance of the body and mind.

I started yoga because I wanted to become more flexible and improve my martial arts performance. I wanted to execute higher and stronger kicks, etc. Initially I thought I should join an adult gymnastics class if what I was looking for was to become more flexible and strong, right? But I am so glad I found yoga. Kenpo Karate has always been a large part of my life. But I never thought I would become so invested in yoga, I can now say that I have found my path.

Upon attending my first yoga class I realised this style of yoga (Hatha Yoga) was not at all what I expected a “yoga” class would be. When we mention the word yoga we think of a class with slim women in leotards standing on one leg, doing the splits, and twisting their bodies in all sorts of directions. My first yoga class was far from this stereotype. The class was slow paced, with an attention to ensuring each participant fully understood fundamental movements. There was an emphasis on breathing and attentiveness, relaxation, and gentle but effective stretching, both static and dynamic. Any stretching techniques I had previously done through martial arts were completely different. I had never experienced stretching like yoga before, it’s fantastic! Stretches originate from deep in the hips and extend directly from the spine, so you can achieve flexibility through the whole back and body. This approach gives the legs a tremendous flexibility while still maintaining and developing a great strength.

One of the main similarities I noticed between yoga and martial arts is the time devoted to perfecting the basics, and simple but vital movements. Yoga Instructors with whom I am familiar ensure basics are first executed correctly before you can progress to more difficult postures. This approach to training is very similar to Kenpo in that learning the system is like building blocks, movements are singular non-complex initially. Then, when you have devoted time to the basics, you are given permission to progress. However, you could apply this to any sporting discipline or fitness training regime.

What I have found vividly similar between Kenpo Karate and yoga is the approach to training required to be proficient. Both disciplines require a dedication and honest devotion to training requiring many hours of training within a week, both your own personal training sessions and classes with an instructor. Yoga and Kenpo share similar values and ethics, and both have eastern origins which exhibit spiritual and warrior qualities. To be a practitioner of Kenpo and yoga one must invest in their own self-development, while still finding respect and compassion for others. If we look at the physical attainments of both disciplines; balance, flexibility, strength, and accomplished breathing techniques; we can see participation in one should naturally improve the other.

I would like to mention a point from the Celbridge Kenpo Karate Academy’s website: www.kenpokarate.ie, an article which was written by Master John Sepulveda. The key points I have highlighted from this article include; – the mental investment required to become a martial artist; attention to basics; the value of working towards a goal; having the willpower and conviction to see goals to completion; and one’s attitude towards their study of the martial arts is the first step to a better understanding of themselves. What I think is key to achievement in any sport or activity is having the discipline as a beginner to persevere with basic lower ranked exercises, becoming effective at these disciplines first, to then be granted the freedom to move into more complex practices. For example, aspects you learned as a yellow belt may not appear the same as when you revisit the movement as a black belt.

The spinal cord is a pathway for messages between the brain and body. As we move muscles and bones through yoga postures, we connect directly into such pathways in the spine. One of the great benefits of this activity occurring is that neurons are reconnected in the brain. This improves our capacity for concentration, and retention of information in the mind and body. These findings provide a great purpose behind the importance of practicing yoga and because you can gain so many great benefits, I feel extremely strong about the practice of yoga. I just think, “Why doesn’t everybody see the need to practice?” for their wellness, longevity, and everyday happiness.

One of the greatest benefits from a regular practice is how you can greatly reduce or eliminate injury in the body and have faster recovery times between workouts. For example, we can relieve the severity of lower and upper back pain, hip pain, sciatica, ankle pain, general muscle strains, and shoulder and neck pain. Yoga practice also lowers blood pressure and improves blood circulation as breaths taken throughout practice relay oxygen to the lungs and to working muscles improving their endurance.

Physical gains include: increased muscular strength and stability in the legs, hip rotation and power, strong stomach muscles, and a phenomenal flexibility in the hips. Such abilities in the lower body will produce stances and a base which is so important in Kenpo. A strong and stable base also sees improved torque on punches, an effective horse stance, balanced neutral stance, strongly executed forward bow, powerful twist stances, cat stances, pivoting of the ball of the foot, and rotation on heel. We can also look at how elements of karate sparring are enhanced through a yoga practice: kicks become higher and stronger, effective pull-drag and rotation of heel when kicking, knee condition/fluidness is improved, quadriceps and hamstring are strengthened, quadriceps and hamstring flexibility, hip flexibility and strength, and core strength (stomach & low back).

What I find interesting is that we as human beings withhold elements and energies in our body which relate to that of nature and the earth. I understand some people may think this sounds crazy, but for us “yogis” we see energies present themselves time and again in our practices. Therefore, the importance of connecting with such energies within our body can be the key to becoming a good yoga practitioner and proficient martial artist. Through our karate basics, forms, techniques and sparring, these elements in the body give us an extra strength and energy allowing us to excel at our disciplines. The five basic elements are listed as: earth, water, fire, air, and space. Earth forms solid structures such as bones and flesh, water forms blood and sweat, fire forms hunger, thirst, and sleep, and air is responsible for all movement, including expansion, contraction, and suppression – Air particularly relates to the conditioning and stretching of our muscles and joints, where we must use our breath to stretch and strengthen muscles. For example, when referring to earth and water at the base of the body which includes the feet, legs, and hips, we seek for strong, yet fluid karate stances with powerful rotations from the hips. Some points from this paragraph have been taken from an article published on The Yoga Journal website written by Dr. Swami Shankardev Saraswati (2007). Referring to the three states of motion: solid, liquid, and gaseous; if we take them from a yoga point of view they could be labelled: earth, water, and air. This immediately refers back to the previous point that the concept of using elements and energies to describe movement in Kenpo and in yoga provide an understanding and meaning to practices.

The Tiger and Dragon and the Yin-Yang

Referring to the Tiger and Dragon represented on our Kenpo Karate patch (pictured below): The tiger represents what’s known as earthy strength, demonstrating an individual impressed with physical prowess for example. Whereas, the Dragon represents spiritual strength, an evolved and wise black belt perhaps. A Black Belt who now adheres to martial arts ethics, displays leadership qualities, has a lack of ego, and exercises kindness to others, alongside great martial arts and yoga physical abilities. This concept can be compared to what’s known as the Outer and Inner body of yoga. Many people believe yoga is a practice which only stretches and strengthens limbs alone. That the shapes and postures which are made in a yoga class are what is most important. However, the vital element to a yoga practice is connection to your breath and inner body awareness; that the physical practice of yoga is a stepping stone to a spiritual sense of being.

How does my participation in yoga give me empowerment as a woman, in general, and a woman in Kenpo? Both my practice of yoga and martial arts has instilled in me a great confidence and belief in my abilities. I have enhanced my skills greatly and given myself an “edge”, that without true commitment to a yoga practice – many cannot achieve similar understandings of the body. For me, as a martial arts coach, I now have a greater understanding of human anatomy and how the body moves and works. This scientific understanding equips me with the ability to explain to students how to specifically perfect a movement from a yoga and martial arts perspective, i.e.; improving my ability to be specific and coach a technique. This added element to my coaching skills presents a reassuring capability to my array of qualifications where students can instill a trust in me as a coach.

To finish, I would like to highlight that yoga practice should not be classed as a predominantly female discipline. I would predict that social norms see it that way. In my opinion, this is certainly not the case. My first teacher was male and there are many male practitioners in my school. As we take many measures to promote women in Kenpo, the same should be said for men in yoga. That is, ideally we are looking for a balance of the sexes in martial arts, yoga, and any sport.

I would like to thank Andree for this opportunity to share my views and knowledge about our art, Kenpo Karate, and the amazing world of yoga. I am honoured there is interest in my story. I am grateful for this recognition and celebration of women.

Living with heart (2003)available at: livingwithheart.com

*This story originally appeared on the website, womeninkenpo.com, and is reprinted here with permission.

Mike Aloia -
0
Anxieties and high expectations we have by convincing ourselves that we are in control of the moments in life is an illusion within the reality of circumstances.