I found myself standing on the red carpet at the Los Angeles Convention Center. No, it actually wasn’t red, it was a purple carpet representing the ‘mad Titan’ evil villain, Thanos played by Josh Brolin. As the theme song from the first Guardian of the Galaxy’s “Hooked on a Feeling” by Blue Swede came on, everyone began to sing every word in unison as if we all knew each for the past 12 years. A few minutes later, Robert Downey Jr. steps out of his Audi-sponsored sports car, and the fans start chanting “Robert”, “Robert”.

This is what Marvel has done, created a family of fans. 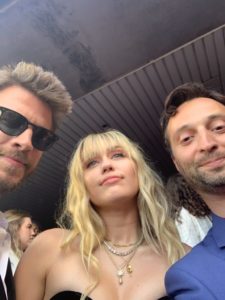 It would take at least two lines of this article to list the number of ‘A’ list celebrities present for the event celebrating a climax of Marvel films culminating with the “End Game”. Just for kicks, to name a few: Robert Downey Jr., Miley Cyrus, Liam Hemsworth, Chris Hemsworth, Elizabeth Olson, Chris Pratt, Benedict Cumberbatch, Paul Rudd, Chris Evans, Gwenyth Paltrow, Jon Favreau, The Russo Brothers, etc. etc. Who was the nicest, who was the meanest? None, really. Maybe it was just the enthusiasm of the fans or the glam of the day, but everyone seemed to know each other, both on and off the red carpet. Brie Larson being the newest member to the crew still seemed to fit into the ‘family’ of actors and fans. The Marvel Universe has created it’s own little Hollywood of sorts. In fact, many of these actors have either jump-started their career or catapulted it since their entrance onto the Marvel movie scene.

What is it all about? Hidden in secrecy, the great hype of this movie is only magnified by the charismatic personalities, directors, and actors. Hitting the theaters last year as the greatest weekend Blockbuster success in history, the End Game is like a well thought out sequel that will likely double last year’s success. If the worldwide enthusiasm is not enough, the very fact that most sales for the movie have already sold out, and many theaters are holding screenings for over 72 hours. Talk about overtime pay! It would not be far-fetched to say that this world premiere and debut of the End Game coming out this weekend beginning in the USA on Thursday, April 25, will be the most widely seen movie in history.

Shelley Stepanek -
0
I have to rave again about the greatest new bakery in town; FRED’S INTERNATIONAL WHOLESALE BAKERY.
An online magazine for every age and culture bringing not just news, but articles that cover entertainment and lifestyle while also highlighting everyday people in communities around the world. We aim to inspire and celebrate real-life humankind with stories that matter and bring positive and feel-good vibes with a touch of tears and smiles to the reader.
Contact us: info@nsaen.com
© Copyright 2019 | Designed and Developed for NSAEN, LLC