Takes on Male-Dominated Horror Film Industry with a Cutting-Edge, 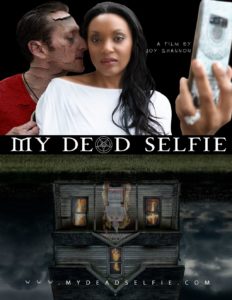 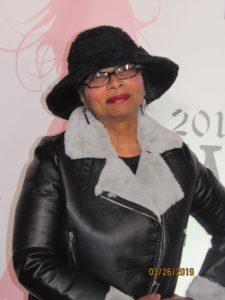 When writer/director Joy Shannon decided to venture into the macabre with her first horror/thriller, titled My Dead Selfie, she knew, as an African American woman, there would be challenges.  Her goal was to create an artistically profound and entertaining film.  Armed with an interesting script, good actors, a small production team and a tiny budget has resulted in a bold, complex and captivating indie thriller.  Although the critically acclaimed movie was shot with a micro-budget, it did not compromise the integrity and creativity of the film.  In fact, said Joy, “We were able to shoot the award-winning film in less than 14 days within an ideal setting.”

My Dead Selfie revolves around an African American woman who is married to a white man.  Their seemingly perfect marriage begins to unravel when the husband attempts to break a curse placed on his family during the American slavery period.  He tries to dissolve the curse by practicing a ritual passed down to him by his slave-owning ancestors.  The film is infused with morbidly compelling acts that feature historical vestiges of the husband’s dark family past.  A.J. Garrett gives a rich and powerfully haunting performance as Hal, the loving husband, whose character explores the dark recesses and contradictions of America’s deplorable history of slavery.

A.J. prepared for his role by researching the history, ideology, and racism of the Ku Klux Klan.  “Although I am well aware of the history of racism, I needed to understand the motives behind the hate groups,” said AJ.  One of the things that attracted AJ to the project was a unique approach.  “I have always been a film watcher, aware of the history of the KKK.  I tried to understand where the racism was coming from.”

Sharena Walker is captivating in the role of Ginger, the beautiful, naïve, and loving shopaholic wife.  Sharena was elated when she was chosen for the role.  “It was a great opportunity to play a woman involved in an interracial relationship.”  When Sharena initially read for the part, she hadn’t anticipated the intensity of the role.  “I didn’t realize it was horror until I read with the leading man,” said Sharena.  “I also enjoyed working with an African American female director who showed so much passion in her work.” 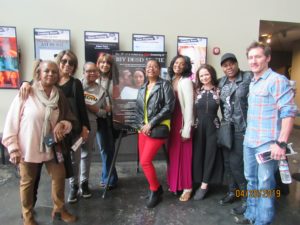 This is a cutting-edge film for Joy, venturing into the horror genre. “My Dead Selfie addresses the exploitation of black women in an eerie way,” says Joy. Further elaborating, “on a microcosm, the dynamics of horror films and racism are similar: a sense of feeling trapped, singled out and often attacked, and consciously and subconsciously kept in one’s place.”  Aware of the public’s appetite for horror in a world of lies, deceit, and trickery, a haunted house adds to the elements of why this film is so appealing.  Hal represents America today in many ways.  Ginger represents some black people who tend to look away and lose a lot by being in denial.  There were a number of symbolic elements throughout the film.  And, although there were budget restrictions, it did not stop the creativity of the project that takes place during eras of the past and present.  Joy’s background in art helped to create the symbolic paintings within the film. The art is one aspect of the visuals used to set the tone for the movie.

For African Americans, horror films are gaining in popularity because they allow for renewal of restricted outpouring of emotions that are difficult to deal with (such as racism) and purging those emotions through the experience of watching art.  While a large number of older African Americans shy away from horror films, the millennials are breaking box office attendance, viewing films like Jordan Peele’s Us.  This is an ideal time for the introduction of films like My Dead Selfie. 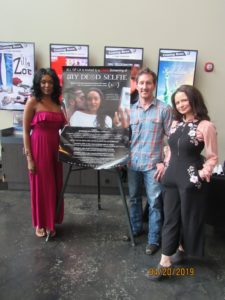 My Dead Selfie gained recognition after winning The Best Experimental Feature Film award from the prestigious Downtown LA Film Festival.  This was especially gratifying for Joy to compete in this male-dominated industry.  “For me,” said Joy, “this is just the beginning of getting into the horror genre.  I want to continue to direct cutting-edge films in various genres.”  With her first venture into the horror genre, Joy hopes that this film will precipitate a movement toward more films that infuse the African American experience into the supernatural.

Joy’s keen interest in the supernatural and horror genre was the inspiration for her writing and directing My Dead Selfie, as well as her interest in social issues and race relations. “The history of the African American experience has been horrific in many ways,” Joy says, adding that it is, “much like being trapped in a real-life horror film.”

My Dead Selfie is a departure from the comedies or love stories that have provided a limited number of African American successes within the film industry.  Joy has made it known that she didn’t set out to make a “chick flick”.  Although she loves a good comedy or love story, she wanted to explore the thriller/horror genre.  Delving into the supernatural horror/thriller genre has given her entrance into one of the most vivid styles of cinema.  The films that had a great deal of influence on her include The Exorcist – she feels it’s the all-time best horror film – hands down!, Rosemary’s Baby, Paranormal Activity, Get Out, The Others,  Insidious, The Conjuring (1 & 2), The Blair Witch Project, Night of The Living Dead, A Quiet Place (and Joy grew up in the Quad Cities, which is also where Bryan Woods and Scott Beck, two of the three screenplay writers are from), The Birds, Psycho, Lifeboat, The Shining, Bird Box, The Babadook, Da’ Blood of Jesus, Tales from the Hood, Carrie, The Omen, Poltergeist, Ringu, and Jordan Peele’s Us.

Complimentary Screening of My Dead Selfie in Los Angeles

How to Lead a Hybrid Workplace Effectively