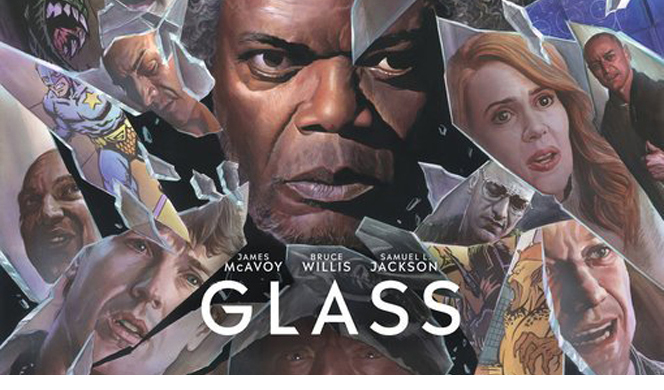 A MIXED BAG OF BAUBLES

There’s a lot of hate being lashed out at writer/director M. Night Shyamalan’s truncated, and unexpected end of a trilogy, Glass. This is the follow-up to M. Night’s cult hit Unbreakable, and his highly successful Split. The idea of pitting a real life super hero against two real life super villains, and then discounting them by placing them in a mental facility for their delusions of grandeur is an excellent hook.

There are great ideas in Glass, but the execution feels off, and by the third act what fans looked forward to gets tedious with M. Night trying to out twist himself, and delivering a serious death scene that resembles Deadpool 2 and borders on ridiculous. People are laughing, but it’s not supposed to be funny. In fact, there are several awkward moments that made this critic cringe.

Let’s start with reintroducing David Dunn, Bruce Willis. It’s eighteen years later, his son, Joseph, the same actor from Unbreakable, now works with his super dad seeking out the Horde, James McAvoy, while playing vigilante, weeding out small time hoodlums. The scene that is so ingratiating is Joseph relaying information to his dad, and repeating “Dad” four times. After the first time, we know Joseph is his son, but it’s as if M. Night had to hammer it home. It’s not the first time M. Night takes his hammer out.

Having the head of a mental institution, played by Sarah Paulson, eventually gather all three players together and insist they are just normal people with serious psychological problems is once again a nugget of a good idea, but it falls flat. The explanations given by Paulson just don’t fly when we the audience have witnessed what these people are capable of. So, M. Night picks up that hammer again and attempts to drive his thought process to an already jaded audience.

Then, there are the unnecessary flashbacks explaining why the players are who they are and emphasizing their weaknesses. Hammer time! What might have been done with a line of dialogue gets exposition that feels laborious. This continues into the third act that becomes the most tiring. Okay, one or two good M. Night twists are acceptable, but four or more! The whole thing starts feeling redundant. Not only that, we’ve already figured out most of these twists. There’s little surprise, and the whole thing starts feeling like a tool so M. Night can get on a gravy train franchise.

And wait!!! Why the hell is this movie called Glass when Samuel L. Jackson does not show up until the second half of the movie and when he does he hardly has any lines. Freckin’ M. Night in his bit part may have more dialogue than SLJ. I get why M. Night titled the film at the very end, but it’s misleading, oh and I guess that’s the tail end twist. All the great spots of SLJ in the trailers is just about what you get in the movie. Very little else.

I guess I could go on with the annoying characterization of the wise old black woman that starts mumbling to herself, telling us her son had a plan. And, the near waste of bringing back the very talented Anya Taylor-Joy and barely fleshing out her character. But, even though soured by all these shenanigans or ineptitude in filmmaking 101, I still found good in Glass. Taylor-Joy does the best with what little she’s given. Willis plays his character seamless as if we’d all recently seen Unbreakable. Samuel L. Jackson is wonderfully unhinged and diabolical nearly entering Hannibal Lecter terror-tory. But, the true star of the show is James McAvoy, listed as twenty different characters!

McAvoy commands the screen and his performance is even better in this than it was in Split. Whether he’s acting out as a little kid, being demure as a matron, or frighteningly scary as The Beast, McAvoy has us glued to his every move. His transitions to all the different people in the Horde is a downright showstopper, and is the main reason to see this movie.

There is suspense, some intentional laughs, but there are also too many unintentional ones and sometimes it feels as if M. Night may be the Horde himself while working against his good intentions. As I mentioned before, the film is such a mixed bag of good and bad it confuses the audience to the point that some started to applaud at the end, but actually stopped themselves after two claps (at my showing). Then, I could hear the discussions immediately about everything that was wrong, eventually turning it around and justifying a good time anyway with no desire to see M. Night take his franchise any further. 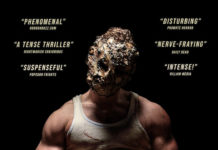 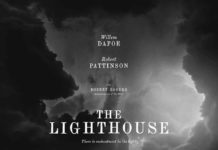