On Thursday, May 9th, 2019, SCAD Film and Television department students taking a distribution and marketing class are hosting a special event local premiere of the Award-Winning Documentary Life in the Doghouse. Additional to the screening the class will have a fundraiser for Danny & Ron’s rescue to further help dogs in need. 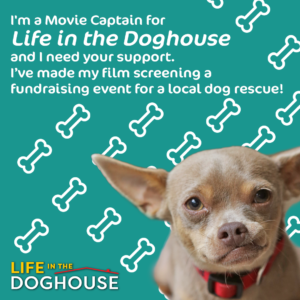 The film will be played at the AMC Classic Savannah 11, 1150 Shawnee St. Savannah, GA 31419, and tickets can be purchased exclusively via Gathr at https://gathr.us/screening/28829

Life in the Doghouse is a documentary following the lives of Danny Robertshaw and Ron Danta as they save dogs from shelters and euthanization by adopting as many as 75 dogs at a time on their ranch. Over the course of the last ten years, both men have saved over 10,000 dogs and in 2008 were even awarded the ASPCA Humanitarian Award. 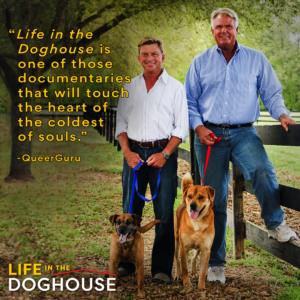 The movie follows their journey through saving these dogs and documenting their lives both living with them and finding new families for them. The film was directed by Ron Davis, who also directed the award-winning 2016 documentary Harry and Snowman. The AMC will also be allowing dogs outside the premises for an informal meet and greet. The event will coincide with Puppy Mill Action Week (May 5-11), and the class will be raising awareness of the unethical treatment of dogs as well as the high amount of euthanasia not only in our country but also on the state and local levels as well. Students will also be at Forsyth Park on April 19 and 20 raising additional awareness. 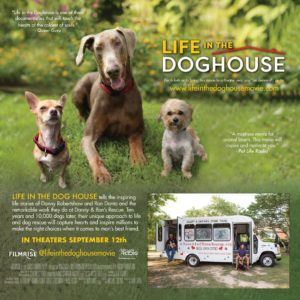 To hold the screening, 46 more tickets must be sold by April 28th, 2019 and can only be exclusively purchased via Gathr once again at https://gathr.us/screening/28829. The class is led by Professor Stephen Stanley, whose distribution company Ketchup Entertainment released over 25 films during his tenure there from 2012-2016. The class is a hands-on practicum analyzing contemporary trends in media distribution. About Gathr: Gathr Films is a technology-based specialty theatrical distributor focusing on documentaries and issues-oriented films. Gathr pioneered Theatrical On Demand® in 2011. TOD screenings harness organic demand—screenings occur when a minimum number of people reserve tickets in advance. The company works with more than 3,000 theaters across all the major theater chains including Regal, AMC, Carmike, Cinemark, Marcus, and Wehrenberg. Gathr uses political-style grassroots coalition-building to target decentralized communities to galvanize their supporters and communities around social impact and political action. Gathr also works with some of the largest and most prestigious brands and organizations to build national coalitions with our films, including UNICEF, UN Foundation, Just Label It, Faces and Voices of Recovery, and National Association of Social Workers 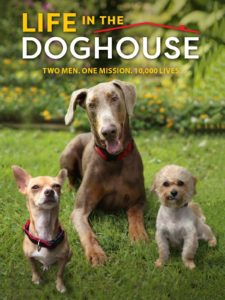 Official Logline: LIFE IN THE DOG HOUSE will tell the inspiring stories of Danny and Ron’s Rescue (501c3). The film will showcase their unique approach to dog rescue and adoption, which has enabled them to rescue and adopt out 10,000 dogs. Official Synopsis: Life in the Doghouse, directed by Ron Davis the award-winning filmmaker of the NY Times Critic’s pick and 2016 box-office hit, Harry and Snowman, tells the inspiring life stories of these two men and the selfless work they continue to do. With a no-kennel policy, there can be as many as 75 dogs living with them in their home at any given time; the dogs also join them on the horse show circuit on their journey of finding their “forever home”. Danny & Ron were honored with the 2008 ASPCA Humanitarian Award for their unwavering personal sacrifice and unique approach to dog rescue & adoption during hurricane Katrina. Ten years and almost 10,000 dogs later, Danny & Ron’s Rescue has become the voice for abused, abandoned and starving dogs. Their story captures hearts, entertains, educates and will inspire millions to make the right choices when it comes to man’s best friend. More information can be provided at doghousepr250@gmail.com or at http://www.lifeinthedoghousemovie.com.

Innovations in Green Cleaning for Homes and Offices

Richard Norton -
0
Also, in order to be the best version of ourselves, it’s important that we always look for the good in others. We have to get rid of all the negative energy.
Thrive, Inspire, Live — No Strings Attached E-News - NSAEN is a lifestyle online magazine featuring eclectic entertainment, health and wellness tips, and your playbook to Vegas.
Contact us: info@nsaen.com
© Copyright 2019 | Designed and Developed for NSAEN, LLC