The Hunger Games: The Exhibition is set to open at MGM Grand Hotel & Casino Las Vegas in May with a fully-immersive archery training experience, as well as new interactive, set decoration and costumes. 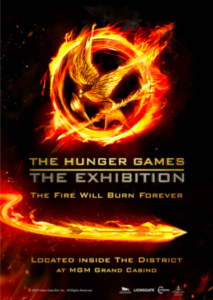 The previous tour of the exhibition included New York, San Francisco, Louisville and Sydney, Australia. The Hunger Games is based on the films from Lionsgate, which grossed over $3 billion. It features the journey of Katniss Everdeen from her humble beginnings in District 12 to her rise as the famous Mockingjay.

The exciting new experience features galleries including the Hall of Justice, President Snow’s Office, the Tribute Train, District 13, and an archery training experience.

The Hunger Games: The Exhibition highlights costumes, props, and set recreations from Lionsgate’s record-setting series. The exhibition includes multiple exclusively-designed experiences such as hands-on interactives that invite participates to engage with behind-the-scenes content and explore the technology.

With 30 original costumes, the Costume Gallery will have pieces from The Hunger Games films including the Girl on Fire dress, the Mockingjay gown, Katniss’ Mockingjay armor, and pin, Peacekeeper armor and rebellion tactical gear, as well as Katniss’ bow and arrows. The exhibit’s retail shop will offer clothing and collectible items from the film.

“Cityneon and Victory Hill Exhibitions are thrilled to be working with Lionsgate to expand our portfolio of experiences in Las Vegas,” said Welby Altidor, Group Chief Creative Officer of Cityneon Holdings and Victory Hill Exhibitions. “Our partnership to present The Hunger Games: The Exhibition allows international visitors and the local community another opportunity to experience the immersive exhibits we are known for worldwide, and we look forward to revealing additional projects we plan to bring to the Las Vegas Strip in the near future.”

“After touring around the world, we’re excited to partner with Cityneon and Victory Hill Exhibitions to bring an enhanced version of The Hunger Games: The Exhibition to Las Vegas,” said Kirsten Taylor-Hall, Lionsgate Vice President of Global Live and Location Based Entertainment. “The additions of several major new elements, including an innovative archery experience and costumes on display from The Hunger Games: Mockingjay – Part 2, offer audiences an even more immersive opportunity to explore the world of the films.”

Fantasy Celebrates 23 Years at the Luxor

Peyote’s in the Heart of Downtown Las Vegas