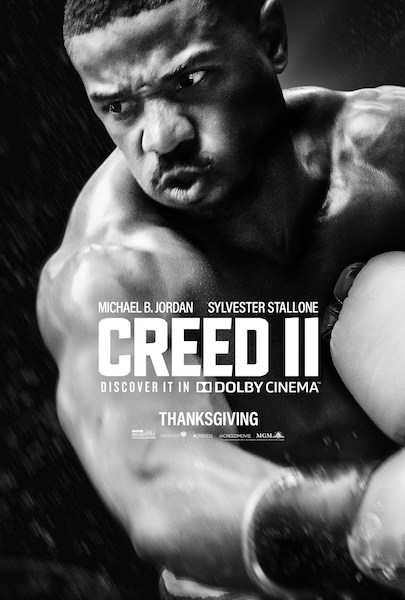 Creed II is Hollywood entertainment of the highest order. A tense and exciting sports picture with equal focus on character. And what characters! I never in a million years thought I’d see Ivan Drago on the big screen, and HERE HE IS. It’s an extraordinary thing. Let me break it down.

First of all, with Creed II, the Rocky franchise has now quietly made a reason for you to see all the Rocky films. All you ever needed to watch was Rocky, the Best Picture-winning ‘70s masterpiece, but you should probably see Rocky II, ‘cause it’s the rematch. Then you could jump to 2006’s Rocky Balboa and see what the champ is like in his older age, contending not just with younger boxers, but loss. It’s easily one of the finest of the franchise, don’t miss it. And you definitely shouldn’t miss Creed, the brilliant reboot of the franchise that garnered Sylvester Stallone and Oscar nomination.

Now, with Creed II, we get the re-introduction of characters from Rocky IV, so it’d be best to see that so you know who the Dragos are…and if you saw IV, you might as well see Rocky III to bridge the gap between II and IV. Also, Rocky refers to his son again in Creed II, the son we meet in Rocky Balboa, so you’ll wanna see Rocky V to familiarize yourself with their relationship and I’ll be damned if now you’re seeing all the Rocky movies.

I’ve made a lot of talk about how the DC movie universe always makes the wrong decisions. Please understand I only make that statement because of every wrong move they make. The Creed franchise is an example of every choice made by Stallone and the filmmakers being right. It’s pretty remarkable. The first right choice was to make Creed about Apollo’s son. That’s not how movies work, right? You’re supposed to make a movie about Rocky’s son. Even John McClane’s kid showed up by the fifth movie. Making a film (series) about Apollo’s son is much more problematic, challenging and emotional, and that’s where good drama lies.

And who would’ve thought when Rocky was holding the body of Apollo in the ring in 1985 that his son Adonis would fight Drago’s son one day, but that’s the plot of Creed II. It’s madness that it’s even happening. No way they thought of that back then, but the advancement of the storylines of this franchise is just another right decision. And this is the hardest to pull off. I’d want Coogler behind the lens for this, but Creed II falls into the hands of Steven Caple, Jr., a director with mostly TV and short film credits and the guy nails it! This plot wouldn’t work in a million years if Drago’s kid challenging Apollo Creed’s kid for the WBC belt were handled in a ham-fisted way or with over-dramatic hyperbole. You can tell at the opening shots of Ivan’s son Viktor training in Russia that you’re in good hands. Those scenes percolate with tension and desire underneath while the characters say nothing. You just get the idea that they’re getting ready, and they’re coming for Adonis.

Elsewhere in the plot, Adonis’ relationship with Bianca (another great performance by Tessa Thompson) grows and the challenges of moving locations and starting a family weigh on him. Throughout, Jordan gives another stellar performance. No pun intended, but his work here and in Black Panther might be 2018’s best one/two punch. Jordan captures Apollo’s stubbornness and susceptibility to ego and in scenes where his body is broken and bruised and he needs to be authentically vulnerable, he proves why he’s one of the best young actors working today. And if you haven’t seen Fruitvale Station, wrap up reading this and rent it today.

Stallone’s script isn’t quite as polished as Coogler’s was for the original Creed. Sly plots the film out perfectly, but it isn’t always populated with the best dialogue, although when it counts, such as in-ring exchanges, Sly captures some great moments. Caple and cinematographer Kramer Morgenthau make up for any routine discourse by framing certain shots masterfully.

If the film is offering up familiar plot points, it’s earning familiar emotions from viewers like me. But who wouldn’t want to feel these emotions? – cheering, laughing, grabbing the arm of my seat when things get tense. This movie has everything you go to the movies to feel. Don’t miss it.