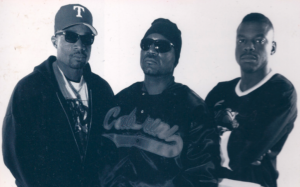 This is the true-story of ERIC DAVIS, JAMES MARTIN, and RANDY HOLCOMB who grew up in some of the roughest housing projects in Chicago. They were gangbangers in a city known for its gangsters, who beat the odds, went to college and came back as the law, hoping to make a difference. Not just cops, but plainclothes “supercops.” Eric, James, and Randy knew the hood and all of the tricks, and they had the guts to bring down the baddest of the bad guys. Their bravery and success did not go unnoticed though; the druglords started smear campaigns implicating them in corruption.

Although these three “supercops” are the most successful plain-clothes officers in the turbulent housing projects, they feel like turncoats because most of the local kids despise them. Despite their efforts to turn the kids away from crime, they are constantly losing ground to local gangbangers intent on increasing drug dealing and gang recruiting in the area. Their main nemesis, JT, an ambitious, ruthless, on the rise druglord is Eric’s old running partner from back in the day when Eric was a gangbanger himself. JT, unsuccessfully tries to get Eric to look the other way.

One day after going to a young boys funeral the “supercops” go to the parking lot of the infamous Cabrini Green Housing Project and confront a bunch of young gangbangers playing an “NWA” rap song entitled, “F*ck Tha Police.” The kids just laugh, turn up the music and call them “slick boys;” the slang name for undercover cops. One of the kids jeers that the “slick boys” don’t like the music because they can’t rap and are just jealous. The cops argue that they can do whatever they set their minds to, just as they could if they’d try. The young gangbangers just scoff and laugh louder. On the spot, the “supercops” challenge the kids to a “who can write the best rap song contest.”

While JT is successfully overthrowing many of the local drug kingpins, Eric, James, and Randy are trying their hand at becoming rappers.

A couple of weeks later the “supercops” come back to the hood to perform their rap song. At that moment they are no longer police officers. They are the Slick Boys. Kids come from all over the neighborhood to hear this rap with a positive message. Soon, the Slick Boys are asked to perform all over the city for troubled youths. Eric, James, and Randy have finally found a way to reach the kids before they turn to crime.

JT grows angry over the Slick Boys’ success and the negative impact it’s having on his profits and recruitment. Nostalgic for the good old days, the druglord puts a hit on the Slick Boys, offering $15,000 ahead.

A bloody showdown that starts in the projects will determine the outcome of all their lives and show everyone’s true colors. The battle spills out into the drug supplier’s Gold Coast bar, exposing the dirty cops that own it. The lethal battle that follows changes the ones that live, forever.

Ennio Morricone – The Maestro Has Left The Theater

Coming Soon to a Theater Near You – COVID-19!

Ennio Morricone – The Maestro Has Left The Theater

45 Things to Save You from Identity Theft

Paul Preston -
0
So, while you’re stuck in your house, there are five movies worth seeking out that are criminally under-seen.
An online magazine for every age and culture bringing not just news, but articles that cover entertainment and lifestyle while also highlighting everyday people in communities around the world. We aim to inspire and celebrate real-life humankind with stories that matter and bring positive and feel-good vibes with a touch of tears and smiles to the reader.
Contact us: info@nsaen.com
© Copyright 2019 | Designed and Developed for NSAEN, LLC